Mika Singh, who performed with a 14-member troupe at the pre-wedding ceremony of a girl who's father, Adnan Asad, is reportedly a cousin of former Pakistan President, General Pervez Musharraf, is banned by AICWA over it. 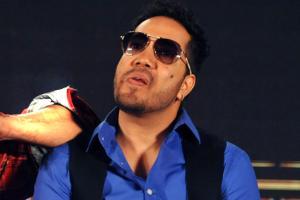 
The All Indian Cine Workers Association (AICWA) has banned popular Bollywood singer Mika Singh from the Indian film industry. For the unversed, the singer is been banned by the association for performing at an event in Karachi, Pakistan. According to reports, the event in Pakistan was organised by none other than former Pakistani President Pervez Musharraf's close relative.

Mika's Karachi performance, which was a 14-member troupe took place in Karachi, Pakistan on August 8. This high profile wedding raised eyebrows when the news started floating that the bride's father, Adnan Asad, is reportedly a cousin of former Pakistan President, General Pervez Musharraf. Mika and his crew were given a 30-days visa, to perform in three cities - Karachi, Lahore, and Islamabad.

Not only this, but a 30-second video clip was also tweeted by a Pakistani journalist which showed Mika's performance at the high profile wedding, despite India severing all artistic and social ties with Pakistan in the aftermath of the removal of Article 370.

"AICWA bans and boycott singer Mika Singh from the Indian film industry for performing at a high profile event at Karachi dated August 8, 2019. AICWA takes a tough stand of immediately boycotting all his association with movie production houses, music companies and online music content providers. AICWA workers will make sure that no one in India works with Mika Singh and if anyone does, they will face legal consequences in the court of law. When the tension between the countries is at the peak, Mika Singh puts money above the nation's pride."

The association also sought the intervention of the Information and Broadcasting Ministry in the matter.

The video hit the internet over the weekend, and it went viral within no time. "Happy that Indian singer Mika Singh performed at the mehndi of Gen Musharraf's relative recently in Karachi. God forbid if it was Nawaz Sharif's relative it would be raining ghadari k hashtag already," tweeted the journalist @nailainayat, with the video that has Mika singing his hit number, Jumme ki raat from the 2014 Salman Khan hit film Kick.

A lot of Twitteratis were offended by his act and started slamming him on social media.

Here's what some of the tweets against Mika Singh read:

"Let them keep this creep in Pakistan," wrote an angry user.

Another user wrote: "When Bollywood gets banned, Pakistanis get singers flown down to sing Bollywood songs for them."

"A traitor may not have been spotted in Pak; but u've brought one to the notice of Indian Tweeple, now!" wrote a user.