Naseeruddin Shah: I am bored of Bollywood 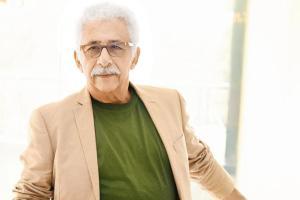 
Veteran actor Naseeruddin Shah is "fed up" with Bollywood and the kind of films it has been making in recent times. The actor, who has been a part of 200-odd films, including cult classics, said that films being made today are just "fluff".

"It has been an eventful journey and if I had a chance to live again, I would love to do it in the same way. I feel fortunate about the life I have lived," Naseeruddin said here on the opening day of the Mountain Echoes literary festival.

He maintained that the Hindi film industry is "all fluff" and it is hard to find anything that will make him thrive in the industry. He said he was no longer interested in "60-day shoots" and was only doing movies that demanded lesser time on his part. "Theatre is what I want to focus more on. At least you can turn back the pages and play Shakespeare or any great works," the National School of Drama-trained actor said.

He maintained that it is difficult to find any creative work in Bollywood, and that web platforms like Netflix and Amazon Prime are the future of film viewing. "I am certain that in the next few years all the cinema halls will disappear," he said.

In response to an audience question on the functioning of the Central Board for Film Certification (CBFC), often referred to as the censor board, Naseeruddin said that he has "never been able to understand" how they function.

But he acknowledged that the board must have its own reasons and said it was easy to blame them. The actor also said that "space for reasonable debate" was shrinking in India and that it is impossible to make movies like "Jaane Bhi Do Yaaron" these days. The Mountain Echoes literary festival is now in its ninth edition and will reach its culmination on August 25.

Next Story : Sanjay Dutt refuses cameo in Total Dhamaal. But why?