Naseeruddin Shah, in his recent interview, talked about the unfortunate demise of Sushant Singh Rajput, the debates and discussions that have happened after the tragedy, and why he thinks its all getting juvenile! 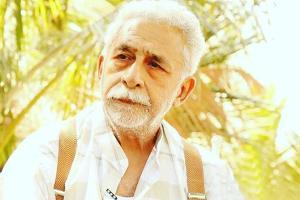 
After the unfortunate demise of Sushant Singh Rajput, there have been multiple debates and discussions on news channels and social media about nepotism, groupism, and even how unfair the Hindi film industry has been at times. Almost every actor and filmmaker has spoken something about this tragedy.

Talking about the OTT platform and how it has the ability to change things for content, he gave his opinion and stated, "And my hope is that people will realise the futility of block-busting, seeti inducing applause inducing, coin throwing kind of movies because that is probably not going to happen anymore. It's going to be very interesting to see what kind of reaction a Salman Khan film gets on the OTT platform."

He continued, "People watching alone at home, will they still throw coins at the screen? No they won't. It's a fever that infects everybody." Shah is now gearing up for Amazon Prime Video's web series, Bandish Bandits.

Next Story : Tanushree on Sushant: Thought after Jiah Khan, this won't happen again