No Fathers In Kashmir Movie Review: A rude shock?

Ashvin Kumar's No Fathers In Kashmir is empathetic in its approach, but critiques the militarisation in the state. 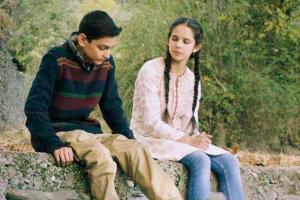 A still from No Fathers In Kashmir

So grim and unnatural are the goings-on in Kashmir, that it's almost hard to find yourself not questioning the films that claim to mirror the realities in the Valley. Ashvin Kumar's No Fathers In Kashmir is empathetic in its approach, but critiques the militarisation in the state. Kumar narrates the story through the eyes of Noor, a teenager oblivious to the situation in the Valley.

Like those of her kind, she continues to showcase her life on social media, ever so often posing with a terrorist because... Well, why not? Unaware of the repercussions of her actions, Noor eventually stumbles upon some harsh truths pertaining to her family. Her father, Basheer was picked up by the Army, and never returned. The more she delves into the details, the more the skeletons she finds in the closet - literally!

Kumar uses Noor's naïvety to explore the plot from the perspective of a third person, elucidating how Kashmir's normal is actually bizarre, claustrophobic and heartbreakingly inhuman. At the crux of the film is an innocent love story involving Noor and Majid, who bond over their unfortunate but common fate as both their fathers were taken away by the Army.

Lucidly shot, and wonderfully executed, the film seems to evade the point that it attempts to make at first, but is more aligned post-interval. Shots involving the goings-on in interrogation rooms, graves that see militants dumped in masses, and the common sighting of stray dogs roaming around with severed parts of the human body, successfully invoke the fear that the makers desire. It's a matter that should most certainly be discussed in mainstream media.

To drive home this point, Kumar successfully highlights the effects of the situation on children when he showcases one kid elaborating on the difference between a terrorist and a militant, to his friend, and attempts to state how those perceived as enemies of the state, have clarity of intention in their heart. The actors are perfect, especially the children.

Kumar's film, however, isn't without loopholes. But you are willing to let them pass because the film makes a brave point - no one deserves to be woken up in the midst of the night by the resounding noise of bullets. Can this be rectified? The film makes an earnest plea, urging us to do our best.

Next Story : Farah Khan: We are making a really big, massive Bollywood musical