Shot in the beautiful locales of Kashmir, Notebook is directed by National Award winner Nitin Kakkar and it is presented by Salman Khan. The film marks the debut of Zaheer Iqbal and Pranutan Bahl 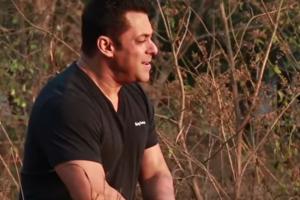 Salman Khan in a still from the video


After sharing six chapters of behind the scenes from the film Notebook, now the makers have shared the seventh chapter of the behind the scenes series, where Salman Khan is seen spilling the magic off-screen.

The makers took to their official twitter handle and shared the seventh chapter, where they wrote, "You gave so much love to #MainTaare! Watch behind the scene of 4th song of Notebook".

Talking about the whole experience about song Salman Khan shared, "I like this song. It's a very difficult song to pull off. I would not do justice to this song at all. After the final recording the song started sounding soothing to ears. Now, the music lovers and audience have to decide how do they like it."

Music composer Vishal Mishra also shared his thoughts about Main Taare, "If you listen to this song, it will move something inside you. The song is just a heart".

Shot in the beautiful locales of Kashmir, Notebook is directed by National Award winner Nitin Kakkar and presented by Salman Khan. The film marks the debut of Zaheer Iqbal and Pranutan Bahl.

Helmed by Nitin Kakkar, Notebook is presented by Salman Khan Films and is a Cine1 Studios Production. It is produced by Salma Khan, Murad khetani and Ashwin Varde, Notebook is all set to hit the screens on 29th March 2019.

Also Read: Exclusive - Pranutan Bahl on her entry in Bollywood: It's home ground for me

Next Story : Akshay Kumar and Katrina Kaif's hit pair to reunite for Sooryavanshi?