Multiple characters are thrown into Pagalpanti, including a villain (Inaamulhaq) whose character is inspired by absconding diamond merchant Nirav Modi 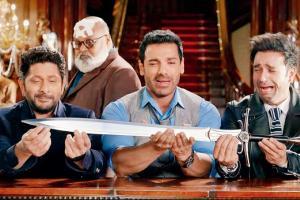 A still from Pagalpanti

When a film's tag-line reads: 'Dimag mat lagana, kyunki inme hai nahi,' you know you are signing up to watch a mindless comedy. But, by the end of this film, my brain was battered to pulp with the inconsistent and stale jokes. John Abraham's character is a panauti, which means he brings bad luck to every business he's involved in, including those he starts with Arshad Warsi and Pulkit Samrat's characters. Their trysts with such projects brings them into the bad books of a gangster (played by Saurabh Shukla), and his brother-in-law (Anil Kapoor). What ensues is chaos. Multiple characters are thrown into this mix, including a villain (Inaamulhaq) whose character is inspired by absconding diamond merchant Nirav Modi. A reference to pop culture is also represented with a hospital called Dr Trump.

Kriti Kharbanda as a dimwitted girl, Ileana D'Cruz, who fails to get one facial expression on point, and Urvashi Rautela, who seems to mimic a ghost with those hideous outfits, are meant to add to the glamour quotient.

Despite a wafer-thin plot, Pagalpanti managed to rope in big names, all of whom failed to inspire earnest laughs. The only exception among this lot is Shukla, who lights up the screen with his presence. He doesn't try to be funny, simply because he naturally is. That's refreshing in a film that's hell-bent on tickling the funny bone, even though all it manages to do is poke you painfully in the ribs. It appears that the makers have merely weaved in a story amidst moronic gags, desperate hamming, a sleazy display of flesh and cringe-worthy dialogues. Only in few scenes does the lunacy hit the mark. The makers seem to miss understanding that viewers will look for reason behind the mayhem that's unfolding on screen, and merely throwing in faces of comic actors like Kapoor and Warsi, is not enough. Their considerable talent is being put to waste here. Actors should question their judgment, which doesn't seem to have happened, in this case.

Next Story : B-town buzz: Madhuri Dixit bumps into Vishal Bharadwaj on the beach