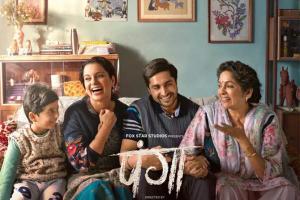 The first time we meet the central characters of Ashwiny Iyer Tiwari's Panga, the hero and the heroine are fast asleep, the heroine, Jaya Nigam, (Kangana Ranaut, searing as always) continues to kick her husband, a wonderful Jassie Gill. We first sense this to be a regular habit, but the next morning we realise she's a former Kabaddi player and this has been the practice for long.

The couple has a seven-year-old son, a scene-stealing Yagya Bhasin, who gets some of the best lines and best scenes with both Ranaut and Gill. Despite the precociousness, you feel a certain sense of attachment to him and the entire family. Tiwari stages wonderful moments between the couple that feel real and refreshing. Even at Jaya's office, a train station, the conversations and conflicts echo the aching realities of India's work places.

Check out the trailer of Panga here:

Jay L. Patel films Bhopal with both charm and care, giving us the fragrance of the heartland. The ode to the soil is such that we only get to read the name of the film in Hindi, and it's hard to recall which Bollywood film was the last one to do that. Panga is a film about dreams, desires and desperations. It's a film about hope and honour, and also about humour. But the filmmaker also laces the narrative with warmth and emotions, but never resorting to melodrama.

A woman's comeback at the age of 32 sounds like a cracker of an idea, and it's helped Tiwari cast an actor known for her ferociousness and fearlessness. Ranaut channels both helplessness and heroism in a knock-out performance. She isn't just a badass Kabaddi player, but also a doting mother, and the actress handles her role with care, caution and charm. Neena Gupta is clearly having fun in her second innings in Hindi Cinema and this itself makes for a great comeback story.

Richa Chadha shows what a good actor can bring to a meaty role and a delicious part. The actress is in fantastic form, especially when she explains to a bunch of girls how playing Kabaddi is similar to seeing a prospective groom, or when she cracks that hilarious line about husband and boyfriend.

Panga isn't much different from the other sports dramas we have seen before. It has the same histrionics films of such nature are known for- Parental conflict, sacrifices, heroic montages, training sequences, and ultimate triumph. But despite all the ingredients, the film is fueled by sharp writing by Tiwari and Nikhil Mehrotra, boisterous dialogues and above all, the impossibility of not to root for the protagonist. Because even sometimes when we know the result, we can't wait to see what'll happen!

Next Story : Vikram Bhatt: She had to shift to Bengaluru after the episode