Parineeti celebrates sister Priyanka's birthday in her own style

The 'Ishaqzaade' actor shared a picture on Instagram, where she can be seen looking fresh in a white off-shoulder top, sitting along Priyanka, who stole the show in a colorful striped dress 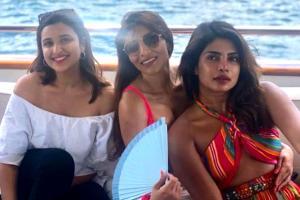 
Parineeti Chopra is making sure that her sister Priyanka Chopra's 37th birthday is the best she's ever had. After the grand celebration in Miami, Priyanka is now rejoicing with friends and family on a yacht trip and her sister's latest social media post is the proof of it."

The 'Ishaqzaade' actor shared a picture on Instagram, where she can be seen looking fresh in a white off-shoulder top, sitting along Priyanka, who stole the show in a colorful striped dress.

This came after 'Desi' girl's awe-inspiring birthday celebration with hubby Nick Jonas on Friday, dressed in a shimmery red dress with an extended cloth piece going down from the waist.

Parineeti, who is currently gearing up for her next release 'Jabariya Jodi', is not the only family member who made her birthday special. Nick's family also showered Priyanka with some love to make her birthday the most memorable day of her life.

Apart from 'Jabariya Jodi', the 30-year-old actor has an interesting line-up of films including 'Bhuj: The Pride Of India', 'Sandeep Aur Pinky Faraar' and the Hindi remake of 'The Girl On The Train'.

She is also busy prepping to play the role of ace badminton player Saina Nehwal. The biopic is being directed by Amole Gupte and is expected to release in 2020.

Currently, she is awaiting the release of 'Jabariya Jodi', co-starring Sidharth Malhotra, which is set to hit the theatres on August 2.

Meanwhile, Priyanka is all set to make her Bollywood comeback with Shonali Bose's 'The Sky Is Pink'. Apart from that, she has also collaborated with American actor Mindy Kaling for a wedding comedy.

Next Story : Do you know about this obsessed Indonesian fan of Parineeti Chopra?