Pati Patni Aur Woh, as you know, since it stars Bhumi Pednekar (along with Kartik Aaryan) is a typically UP/small-town picture, of which there are already one too many. 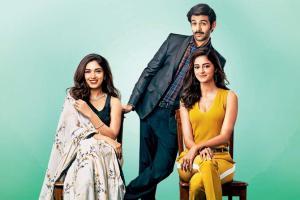 There's something I find deeply pleasurable as a movie-goer, when the place a particular picture is set in, is warmly paid tribute to, with references to its lesser-known landmarks (for outsiders), or even a laddoo shop — for all we care. Because you sense the filmmakers care enough for Thaggu's laddoos, or the premier Landmark Hotel in Kanpur, where this film is primarily set. And they do.

Or, for that matter Clarks Avadh Hotel or Gomti Nagar in Lucknow, where the action alternates between, since Kanpur and Lucknow, only a couple of hours apart, are as good as satellite cities for each other. Sometimes you can't tell when the characters are in Kanpur, or Lucknow, in this film. Nobody bothers to explain.

Pati Patni Aur Woh, as you know, since it stars Bhumi Pednekar (along with Kartik Aaryan) is a typically UP/small-town picture, of which there are already one too many. Most of which star the same new kids on the block, testing their accent skills, being all true-blue desi-cool, spouting the usual 'kulta', 'kantaap' type street slang, which probably evokes much nostalgia for migrants, and a sense of recognition for locals, watching this film from their town.

That said, what happens to all this adorable realism, when you take a perfectly good-looking guy, who's graduated from the elite IIT Kanpur, and you land him a job in this film as an overseer of sorts in the state's public works department (PWD), and get him married off to the first girl he sees on the marriage mart? Because, basically, he has no game?

I'm seeing Rajpal Yadav from the lovely Main Meri Patni Aur Woh (also set in Lucknow). This Amol Palekar type fellow here is Kartik. A Delhi girl he can't believe is willing to hang with him is Ananya Panday (Student Of The Year 2). What's she doing in Kanpur is as unclear to you as what the husband and the wife (deeply attractive Bhumi) are doing to each other, while perfectly happy together.

Is this about a marriage gone stale? It could've been; it's not. Is it about how men are like dogs, born to stray? Could've gone that route; doesn't. Is it simply about the forbidden fruit, which was essentially the point of BR Chopra's 1978 original of the same name, starring Sanjeev Kumar? Not that that picture was a masterpiece or anything. But it had its realism in place. This is more like a mad-cap David Dhawan's Biwi No 1 treatment to the overall idea. In the same vein that Dhawan himself remade Sai Paranjpye's Chashme Buddoor (2013).

Basically a whole lot of random desi-lad humour, in what's essentially a naughty-uncle comedy about the wife, and woh (the other woman). Couldn't find anything funny here. Surely this sort of stuff has an audience. Hope the film finds it then.