The actor, who has an impressive filmography comprising "Khosla Ka Ghosla!", "Bheja Fry" and "Titli", said there are days when he feels bitter especially when people say they want to see more of him 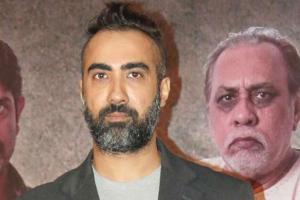 
Ranvir Shorey has walked away with critical acclaim in every film he has been a part of but the actor says he feels deliberately sidelined by the mainstream filmmakers today.

The actor, who has an impressive filmography comprising "Khosla Ka Ghosla!", "Bheja Fry" and "Titli", said there are days when he feels bitter especially when people say they want to see more of him. "You should talk to the filmmakers, especially the mainstream ones and ask them why they don't give me work. I did 'Ek Tha Tiger', but I wasn't in 'Tiger Zinda Hai'. I know and I feel that I'm ignored," Ranvir told PTI.
"I feel I've been deliberately sidelined by the mainstream filmmakers, but I don't let that bother me. If I start thinking about that, I'll lose focus on what I need to do and have to do. I want to do more work. I have time but no work," he added.

The 46-year-old actor said due to lack of quality work coming his way, he has often taken up films which ideally he would not have. "There have been years when I had no films. When you don't get a certain quality of work, you end up doing lesser quality of work because there's no work. I'm a professional actor, I have bills to pay so I end up taking work which ideally I wouldn't have," he said.

"Mostly I try to strike a balance and don't do films which I don't want to be a part of. That becomes difficult because there aren't many great scripts out there, from the ones, at least, I'm offered," he added. Ranvir said, having low quality work, "starves an actor" and it also forces him to bend his ethics.

"When you don't have work for a year or two, you lower your standards a bit for survival. You go through this conflict, you know this isn't something you ideally would've done but to feed yourself and your family, you bend your ethics. "The saddest thing that can happen to a performer is that they don't get work at all and have to do something else to feed themselves... I am sure there are many talented people who don't get deserving work or no work at all," he said.

The actor said the no-work phase has often forced him to question his craft. "There are so many people here, so many talented actors and out of which you have to get parts; it's not easy. Just surviving on this business is a huge achievement. "But, otherwise my criteria to choose a film has always been the same: good script, interesting part and a director I can have a relationship with."

Ranvir, though, said he is a calmer person today and a lot more patient than when he started out. He said his optimism also stems from the new film he is part of, "Halkaa" directed by Nila Madhab Panda. The film is a story of an eight-year-old Pichku, who lives in the oldest slums of Delhi and aspires for a better life.

Apart from this, Ranvir also has Abhishek Chaubey's "Sonchiriya", scheduled to release next year. "These are such good films. When they came my way, I jumped at them. It's quite difficult to get such good scripts and I am glad I am a part of these films," he said. "Halkaa" is scheduled to release on September 7.

Next Story : Prateik Babbar: Cinema is the fastest way to create awareness