'Was in live-in relationship with Sushant, being falsely implicated'

Rhea Chakraborty had received various death and rape threats and she is in deep trauma due to SSRs demise which has multiplied further due to the media sensitivity regarding the case, read the petition 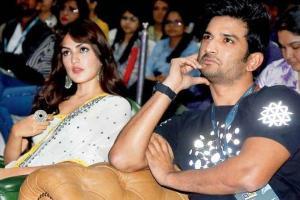 
Claiming her innocence in Sushant Singh Rajput's alleged suicide case before the Supreme Court in her petition, Bollywood actor Rhea Chakraborty said she has been falsely implicated in the case. The petition also claimed that she was in a "live-in relationship" with the deceased actor. "I am falsely implicated in the case," Chakraborty stated in her petition. She alleged that there cannot be an "impartial investigation" in Bihar for the case and hence, she sought transfer of probe in the FIR to Mumbai.

"In Bihar, there cannot be an impartial investigation and thereby she seeks transfer of probe in the FIR registered in Bihar to Mumbai," she stated in her petition. Bihar Police started the investigation after an FIR was registered by Rajput's father KK Singh in Patna against Chakraborty under several sections including abetment of suicide. The Bihar government and Rajput's family have filed caveats before the Supreme Court on Thursday seeking to challenge Rhea Chakraborty's petition.

"It would be just expedient if the transfer of the case is directed from Patna to Mumbai," Chakraborty stated. In her petition, she claimed that Rajput was suffering from "depression from some time and was also on "anti-depressants". "He committed suicide on the morning of June 14, 2020, at his Bandra residence by hanging himself," read the petition.

She had received various death and rape threats and she is in deep trauma due to Rajput's demise which has multiplied further due to the media sensitivity regarding the case, read the petition. The actor further claimed that she had also filed a complaint at Mumbai's Santa Cruz police station against the death and rape threats.

Earlier, Chakraborty had demanded a CBI probe in the case. In another development, the Supreme Court on Thursday refused to hear a petition filed by one Alka Priya seeking to transfer the case to the Central Bureau of Investigation (CBI). Rajput was found dead in his Mumbai residence on June 14.

According to the Mumbai Police, statements of 41 people, including filmmaker Mahesh Bhatt, film critic Rajeev Masand, director-producer Sanjay Leela Bhansali, and filmmaker Aditya Chopra have been recorded in the investigation so far.