In an emotional post on Instagram, Showik Chakraborty wrote that SSR was a brother he looked up to. 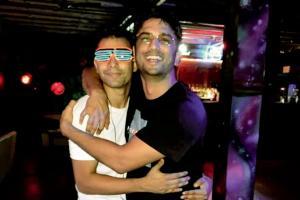 
Over a month after Sushant Singh Rajput's death, girlfriend Rhea Chakraborty's brother Showik opened up for the first time about the equation he shared with the late actor.

In an emotional post on Instagram, he wrote that SSR was a brother he looked up to. "I haven't processed the fact that you aren't here anymore... smiling at the smallest of things, laughing like there's no tomorrow. Happiness for you was not a marker but extreme compassion was. You believed in love and spreading as much love as you could even though you were fighting a battle of your own..."

I haven't processed the fact that you aren't here anymore..smiling at the smallest of things,laughing like there's no tomorrow.Happiness for you was not a marker but extreme compassion was.You believed in love and spreading as much love as you could even though you were fighting a battle of your own..You taught me how to look at life with your perspective and I did and saw that you had already lived life more than anyone could've imagined- you made me live with your perspective ,your vision to change the world. I don't think anything I say will suffice the relationship we shared.My brother ,I looked up to you and now I look up in the sky and see you but guess what?I dont even need a telescope to see the biggest and brightest star.You always believed in my gut,and now my gut tells me you're at a better place so I believe it. There is a huge part of me which will never be able to reason with the fact that you're not here anymore.How do I generate the flow state in me the way you instilled it in everyone around you.... the most humble human I have ever come across. You were a catalyst in my life and drove me to effervescence.. The epitome of intelligence.. Only If I could change newtons laws and gravitate you back here. I know you must have already found out everything about the galaxies and the black hole...sitting with your evening chai and watching the sun right beside you.. My love for you will always make my heart feel full.. The man with the biggest heart and the strongest soul..Today your movie releases and for one last time we can all sit and watch the greatest performer of all time and celebrate him forever. Rest in peace mere bhai Jai shiv shambhoo

Sushant Singh Rajput passed away on June 14, after he committed suicide at his home in Bandra. The news came as a big shock to all his friends from the film and television industry and fans across the world.

SSR's girlfriend, Rhea Chakraborty, too, shared a touching note for the late actor several days after his demise. Sushant's last film, Dil Bechara, also starring newcomer Sanjana Sanghi was released on July 24 on Disney+ Hotstar. Another mid-day review of the film reads, "You know at the outset this is a weepy, set to sweep you off your feet—much like the lead characters are into each other. They're both terminally ill. It's a question of who will pass on first. While that might be true for every so-called eternal couple in the world—the underlying pathos of days being numbered by a disease, is a ticking clock that's hard to shut your ears from."

Next Story : The big bite! Kareena Kapoor Khan gorges on a burger sent by Rhea