Sahil Khattar: It is okay to be bald 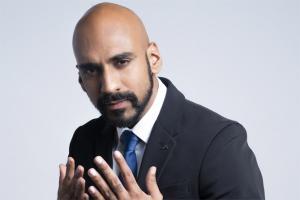 
Be it Ayushmann Khurrana in Bala or Akshay Kumar in Housefull 4, of late, a lot of attempts have been made to get people to accept balding as a part of life. Actor-anchor Sahil Khattar, who plays Syed Kirmani in Kabir Khan's Ranveer Singh-starrer '83, has always slayed his bald look. Now, the YouTuber has came up with the idea of a vox pop on the same. "The USP of the vox pop is to raise awareness about body shaming. You must be thinking that how can body-shaming be related to balding? Body shaming is about fat people and if you talk about a person's color than it is racism. What people need to understand is that balding is also another physical condition. You call it balding, I call it being follically challenged, it's another physical condition," he says.

He adds, "It's high time to assure people that it's okay to be bald. Being bald is as okay as being tall or short, it's just a condition. Balding has nothing to do with your success in life. For example, both Amitabh Bachchan and Aamir Khan are successful, and one is tall while the other is short."

However, the actor says it's totally natural to be conscious of how you look. "People feel conscious, everybody goes for treatments to get their hair back. It's totally cool. We are born with certain features and lack some features, how we spin these in our favor is up to us," he says.

In fact, it was his bald look which helped him bag a role in '83. "Director Kabir Khan felt a bald guy should play a bald guy's [Kirmani] role because they wanted the casting to be as real as possible. I am thankful as because of this, I got an amazing Bollywood debut. There was a time when bald actors didn't get any work in the industry."

Sahil adds that it is only in Indian society being bald is considered as a taboo. "In the West, there is no such notion. Look at Dwayne Johnson. He is the highest-paid actor in the world. He started with wrestling and look where he has reached. Look at Jason Statham, Pitbull and Vin Diesel, they are all bald, but superstars."