In mid- day's new series, Saif Ali Khan, Bollywood's first mainstream star to cross over to the web, tells you what he's bingeing on at home. 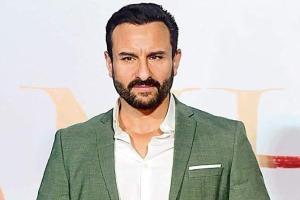 
"I view it as if we are on a ship; we can look out the window, but we can't go ashore and meet other people," muses Saif Ali Khan, who - like the rest of us - is at home as the country is under a 21- day lockdown. Given their otherwise busy schedule, the actor admits that he is cherishing this slow pace with wife Kareena Kapoor Khan and son Taimur.

For Khan, a day in quarantine entails exercising, cooking and reading, with evenings dedicated to catching up on shows. "I have been practising the guitar, too. Plus, Taimur, Bebo and I have been growing tomato plants [in our garden]."

As someone who forayed into digital entertainment long before it became popular in the country, one would expect him to be on the ball when it comes to OTT shows. Expectedly, Khan's recommendations are a lot like him - eclectic and brilliant."I recently watched Fargo and Narcos all over again. My wife loves the '80s TV show, Murder, She Wrote. I am also watching Altered Carbon, but it's a little slow. Next up, I will catch up on The Valhalla Murders; it is a Scandinavian murder mystery series that my friends have been recommending. [I also plan to watch] Genius of the Modern World, a three-part documentary that explains the ideas of Sigmund Freud, Friedrich Nietzsche and Karl Marx."

It is not surprising that Khan, a voracious reader, has more books to recommend than series. "I am planning to start reading King Lear or Richard III."

Tell him it's rather ironic that William Shakespeare wrote King Lear when he was quarantined during the Bubonic Plague, and he agrees, "He did some great writing then. At 1,000 pages, War and Peace look daunting, but I will attempt it. I also want to finish [ John] Milton's Paradise Lost. A large part of my library consists of books on occult, religion and horror fiction. Salem's Lot by Stephen King and The Oxford Collection of Ghost Stories are great picks as well."

Next Story : Sonu Nigam: I have bought equipment to set up my studio here in Dubai