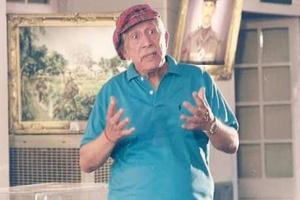 Colonel Raj Kumar Kapoor's son, took to Facebook to share this sad news. He shared a few images of the director and captioned the picture: "This is to inform you that our beloved Dad, Raj Kumar Kapoor (Colonel), has left his earthly body to go on a brand new adventure."


The cremation took place at the Lodhi Crematorium at 3.30 pm on Thursday. There have been several instances where Colonel has been credited for Shah Rukh Khan's stardom. However, he always maintained that he only gave him the platform he deserved and SRK is what he is because of his hard work and his parents' blessings.

In Samar Khan's book, SRK 25 Years Of A Life, Colonel Raj Kumar Kapoor gave an anecdote about Shah Rukh Khan, where he reminisced about how SRK was. He said that SRK has always been a hard-working person. He had played the character of Abhimanyu in Fauji.

The late Raj Kumar Kapoor in the interview in Samar's book had said, "I still remember the sleek boy from Delhi's Gautam Nagar, who had come to my place." The quality that compelled the Colonel to cast Shah Rukh Khan was that he directly came to him and said, "I heard you are making a show and I want to act."

The excerpt further read: "I loved his confidence and called him for an audition. He arrived with the other boys for the audition. Because the show was about Commandos, I made everyone run with me."