The tone is totally along the lines of several small-town Hindi movies - the likes of Badhaai Ho (2018), or indeed Shubh Mangal Saavdhan (2017) that this is a sequel of. It is centred wholly on a semi-functional North Indian joint family. 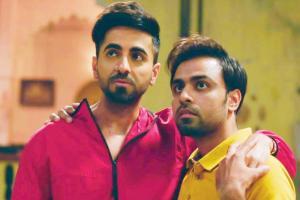 It's hard to put your finger on exactly what's not working with a film that, on the face of it, seems rather well-meaning, with performances on cue with dialogues that are top-notch — to say the least. That's until you figure a near complete absence of filmmaking chops that render this movie so completely cluttered, close-spaced, almost claustrophobic, meandering all over the frickin' place.

Sure the heart's in the right place. The conflict is rather straight (or not; pardon the pun) — the fact there are two boys in love. And the desi family is aghast, unwilling to accept their son's (Jitendra Kumar's) same-sex romance. Maybe the issue is also that the picture gets to this point way too soon — first few scenes itself. There's no adequate build-up, hardly an exposition. This leaves the plot with such little elbow room to manoeuvre.

And so it keeps going back and forth, among a series of uncles and aunts perennially plastered on screen, saying roughly the same things, repeating themselves mostly, and hyperventilating in turns. This is to take away nothing from the uncles and aunts — Gajraj Rao, Neena Gupta, et al. And indeed the lead actors, Ayushmann Khurrana, and Jitendra Kumar (with the meatier central part) who, right from the beginning, gets with the programme.

The programme is known. This is an LGBTQ+ film made by empathetic allies hoping to change audience's mindsets towards same-gender love. It's pretty much set pre-September 6, 2018 — red letter day, when the Supreme Court decriminalised consensual sexual conduct between adults, regardless of orientation. Basically, when it stopped being gair-kanooni to be gay in India.

I watched this film with English subtitles in a regular Mumbai theatre. This is a welcome/pleasant surprise. And it's only because of the subtitles that I could spot from a railway announcement in the background that the train the family is travelling in the film, is numbered 0377 — an obvious reference to Section 377, the striking down of which this picture is a full-on response to.

It's in the default setting for that response that I felt the filmmakers seemed so overawed by the subject that they couldn't quite tell exactly how to go about it. Guess sombre would make it too niche, although several such films on the subject have stood the test of time — Onir's My Brother Nikhil (2005), I Am (2010), Hansal Mehta's Aligarh (2015), Shonali Bose's Margarita With A Straw (2014), etc. Or, place homosexuality off centre-stage, like Shakun Batra's brilliant Kapoor & Sons (2016).

Think they go for the coy, of course not in the same mould as old-world Bollywood with Anupam Kher as the campy weirdo in Mast Kalandar (1991), or even Dostana (2008) that assumed that two Bollywood heroes — John Abraham, Abhishek Bachchan — possibly being gay was funny in itself.

The effort here is to keep things within the mainstream space of comedy, songs, dance, music, the works. No knock. The tone is totally along the lines of several small-town Hindi movies — the likes of Badhaai Ho (2018), or indeed Shubh Mangal Saavdhan (2017) that this is a sequel of. It is centred wholly on a semi-functional North Indian joint family.

After a point the maa-baap, chacha-bhatija business begins to feel like cable television. And all of them looking gobsmacked at a gay-couple kissing in public would be just as true for a man and woman doing the same in tier-2 town Uttar Pradesh.

If this is really the first proper Bollywood same-sex romance then, I mean come on, show us that love. Make it about these two first. The motivations behind this movie are laudable still. Assuming we've adequately applauded for that already. There are some fine moments, and really funny lines as well. It is still a film though — a story that you have to sit through for two hours plus. I just couldn't carry on for that long on intentions alone. That said, wish this film the best, of course.

Next Story : Bipasha and Karan Singh's Maldives pictures are giving us vacay vibes