Dropping another bomb, Simmba makers have released the first song from the film Aankh Marey today, giving a fresh chartbuster for the party season 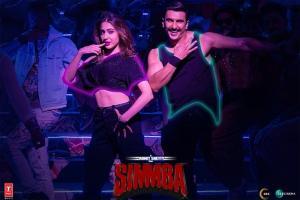 
Simmba trailer has expectedly created a vibrant sensation across all platforms. Aankh Marey crooned by Neha Kakkar, recreated by Tanishk Bagchi with lyrics of Shabbir Ahmed, the song is the revamped version of yesteryear's number by the same name and has been revamped with an eccentric style attached to it.

Along with Ranveer Singh and Sara Ali Khan, the music video also features the Golmaal Gang - Arshad Warsi (who was also part of the original version), Tusshar Kapoor, Shreyas Talpade and Kunal Kemmu amidst the colourful vibes and desi tunes, highlighting their magnetic camaraderie of a kind.

While Ranveer has already floored everybody with his on-screen avatar in the trailer, we certainly can't wait to watch Sara as Simmba's love interest.

Check out the song right away:

Simmba revolves around a corrupt police officer who eventually stands up against the rapist in the film. "I think cop film works when you incorporate socially relevant issues in it. When you see films like Zanjeer or Singham you will see that the makers of that film have shown relevant issues which existed during that time," Rohit Shetty said in an interview.

In Simmba he has tried to show the subject of rape cases which is quite relevant in India. "In Simmba, we have shown quite a relevant problem which has been faced by the entire country. It's our take about what we can do or what can happen to deal with the issue," he said further added.

Next Story : Priyanka Chopra's response to the demeaning article is class!