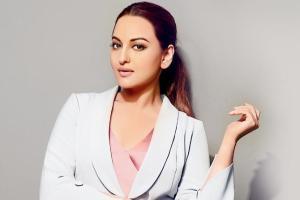 
Actress Sonakshi Sinha will be judging a digital fashion reality show and says the show wants people to embrace fashion and not be intimidated by it. The Zoom Studios, the original content arm of Zoom, and Myntra have collaborated to create fashion influencer hunt titled Myntra Fashion Superstar. The show is slated to go live in September across The Zoom Studios and Myntra's social media platforms.

"If anything is a true representation of one's personality -- it is fashion. I have always been drawn towards it because there is something exciting happening in this space all the time," Sonakshi told IANS over an email.

"While fashion is such an integral part of our lives, we haven't had any show so far dedicated purely to it. I have always strived to do something different and new, and I jumped on the opportunity to judge India's first ever hunt for the biggest fashion influencer.

"Through the show, we want people to be inspired to embrace fashion and not be intimidated by it," she added.

As a judge, Sonakshi will be on the lookout for "fashionable men and women who create their own styles and not just replicate stuff off the runway".

"Confidence is another parameter that would be high on my judgment radar because I believe good fashion stems from great confidence. Influencers who are fun and vivacious are a big personal tick for me because that reflect massively on your style.

"I'll also be looking for breakthrough styles put together... something that one hasn't encountered before. So basically surprise me, make me smile, leave me in awe and your unique style and most importantly be true to yourself...and you have my vote," added the actress, who is looking forward to the release of "Khandaani Shafakhana".

Sonakshi started her career as a costume designer and now she is judging a show about fashion. She says it has been a "constant evolution".

"Fashion intrigues and excites me at the same time. From being a fashion graduate to a judge on 'Myntra Fashion Superstar', it has been a journey of constant evolution and constant learning," she said.

Next Story : Abhinay Deo: Doosra is very special to me