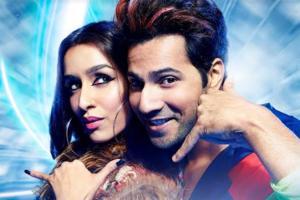 
After creating a stir with songs like Muqabla, Garmi, and Illegal 2; Street Dancer 3D is bringing back the groovy song – Lagdi Lahore Di which is sung and composed by Guru Randhawa and Sachin-Jigar and is penned by Guru Randhawa and is sung by him and Tulsi Kumar. The song is choreographed by Kruti Mahesh, Rahul Shetty (RnP).

Shraddha teased her fans by sharing a glimpse of the song on his Instagram handle. Sharing the teaser, he wroe, "Droppin your favourite track tomorrow! Get ready to groove on #LagdiLahoreDi."

"The team had permission to shoot on O2 for only six hours and the team used ropes to climb up. With two hours gone in climbing up and getting down, we had only four hours to complete our shoot. Since only a limited number of people could go, Varun and Shraddha even carried camera equipment each," says Remo.

Varun and Nora had later proceeded to Dunsfold Aerodrome in Surrey and then to Dubai which was scorching at 48 degrees. Remo says, "They had to wear the same costumes as the UK shoot even though the weather changed drastically. By the time we wrapped up the song in Bollywood Park in Dubai, the entire crew had fallen sick."

Producer Bhushan Kumar adds, "Even though it's a pure romantic dance number, it comes at a crucial point in the film and provides a twist in narrative."

Talking about her experience recording the song, Tulsi Kumar shares, "Lahore has been treated very differently for this version in Street Dancer 3D. It's been a blockbuster track in the past and I'm thrilled to be part of this very groovy track. I had a great time recording it with a new set of lyrics and melody introduced as the girl's part."

Next Story : Radhika Apte shares some fun BTS of her upcoming film, find out