Suniel a.k.a 'anna,' who turned 61 today is among some of the most fitness-conscious stars of Bollywood 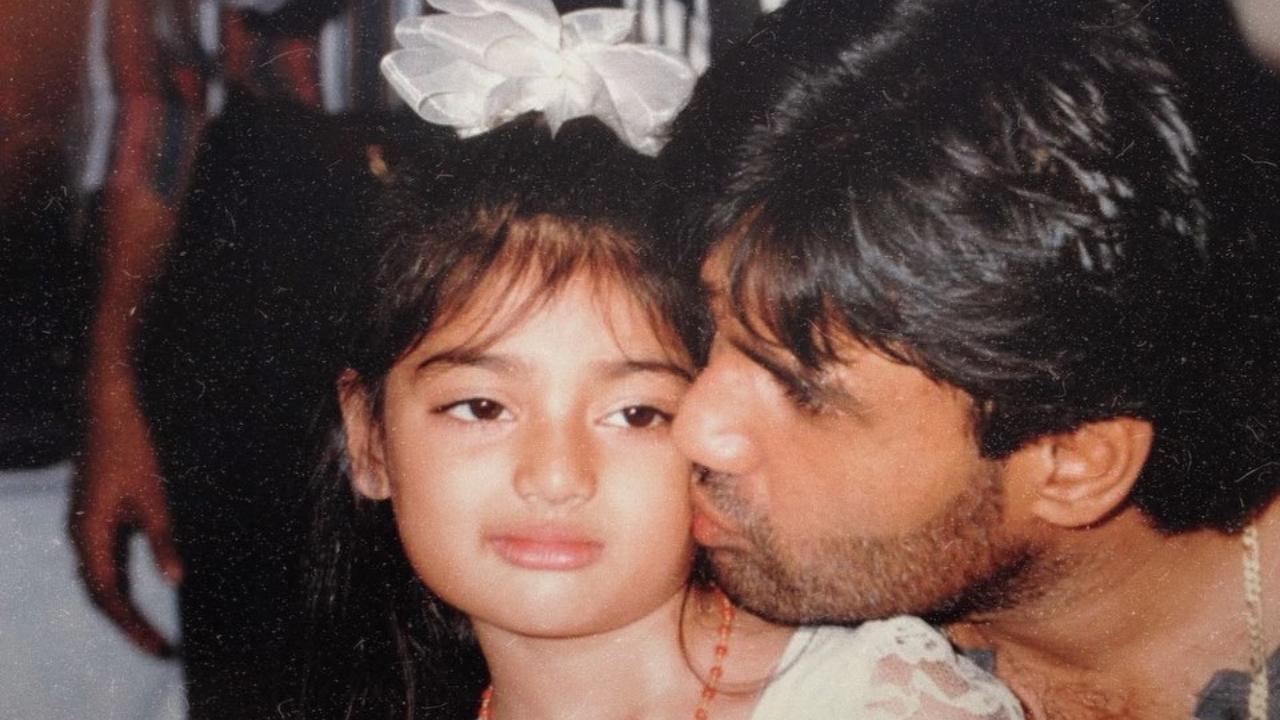 
Actor Athiya Shetty shared adorable pictures on her father Suniel Shetty's birthday with a sweet message on social media. Taking to her Instagram stories, the actor dropped old pictures with her father and penned down birthday wishes.

In the picture, Suniel was seen planting a kiss on the cheeks of young Athiya. She was dressed in white net sleeves dress. Sharing the picture, she captioned, "Happy birthday, Papa. Love you so much!"

Athiya also posted a video where a father-daughter duo could be seen dancing and having fun. The 'Motichoor Chaknachoor' actor hopped into her father's shoulder and both started to groove on Bollywood hit songs. And she wrote, "Thank you for always carrying me tall no matter what."

In the other picture, it showed little Athiya wearing a sunglass, while Suniel holds her up with his hands. Athiya also gave glimpses of the birthday celebration with a picture of her parents.

In the image, the 'Hera Pheri' actor was seen wearing a blue sweatshirt with a heavy beard look and a ponytail. On the other hand, her wife Mana Shetty was dressed in a black outfit and flashed her lovely smile towards the camera. Being a health and fitness freak, the birthday boy also seems to be healthy and full of fruits including bananas. Further extending the birthday greetings Suniel's son Ahan shared pictures on his Insta stories.

Also Read: Suniel Shetty: My first cheque came from Sajid Nadiadwala; 3 decades later, he has given Ahan his first cheque

Suniel a.k.a 'anna,' who turned 61 today is among some of the most fitness-conscious stars of Bollywood. He keeps on motivating his fans for staying fit by posting their individual workout pictures on social media. In his career span of over 25 years, he has given some blockbuster movies to the industry.

Suniel Shetty made his debut in Bollywood with 'Balwan'(1992) movie alongside late actor Divya Bharti and the film was a super hit.

Meanwhile, the daughter of Suniel Shetty, Athiya, recently made her debut on YouTube as she opened her channel on the particular social media platform and was last seen in Motichoor Chaknachoor, alongside Nawazuddin Siddiqui. She made her acting debut with Salman Khan's 'Hero' along with Sooraj Pancholi in the year 2015. The film failed to impress the audience at the box office.