Tumbbad premiered at the prestigious critics' week at Venice film fest earlier this year. It opens locally this Friday to vastly expand your choices in Indian theatres. Yup, worth taking that call. 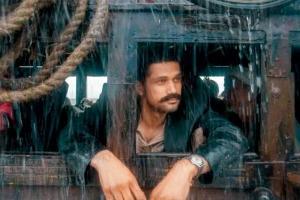 Part morbid-fantasy, mostly magic-realism — hardly a mainstream genre — this is the sort of "festival" film that employs movie-horror as a way to draw you in, first. Since there are no creaking doors, and much less info on what's in store — fewer dialogue, and hardly any reference points for the characters before us — it takes a while to get used to this imaginary world.

How much time? Well, that depends on how patient you are as a lay (or lazy) audience. But, essentially, with some seriously effective, exquisite production design — simultaneously traversing dark, empty well/cave; and vast, rain-soaked Maharashtrian rocky terrains (never so strikingly filmed since Avinash Arun's Marathi masterpiece, Killa) — the film further juxtaposes legend/mythology, with a legit period drama.

The folklore relates to the Goddess of Plenty, who held the Earth in her womb. Her first-born, Hastar, turned out to be a greedy pig, cornering all the world's wealth; or gold, as it were. While his mother saved him from the resultant wrath — even death as punishment — he was cursed to never have a temple under his name. Tumbbad, a village of humans, defied that curse.

As a period piece, this film is chapterised into three time-lines, from early 1900s, down to mid-century — basically capturing the transition from British imperialism, rural-urban feudalism, to Indian independence — while the central character, a Brahmin boy, all the way to adulthood, remains attracted to Hastar's gold. Which is as good a McGuffin as Mackenna's Gold, to script an allegory around cardinal, Biblical sins — greed, to start with, then lust, gluttony, sloth.

For inspiration, the filmmakers point to Narayan Dharap (1925-2008) — a tremendously prolific author (with over 100 titles), who I'm told, is also referred to as the Marathi 'Stephen King' (apparently some of his plots had seemed eerily similar to ones by the American superstar of supernatural fiction).

Either way, what we have here though is actually an artsy, gutsy mix of mythology, history, horror, and moral science. Do these elements seamlessly add up for you to naturally feel for the characters in the story? Honestly, no. Does the incredibly strong visual craftsmanship (rare for an Indian indie) satisfyingly guide you into a world hitherto unseen/unknown? Oh, absolutely.

Tumbbad premiered at the prestigious critics' week at Venice film fest earlier this year. It opens locally this Friday to vastly expand your choices in Indian theatres. Yup, worth taking that call.