Composed and sung by Badshah along with Neha Kakkar, the song will feature Nora Fatehi, Sharaddha Kapoor and Varun Dhawan's troupe in the film show off some sizzling moves. 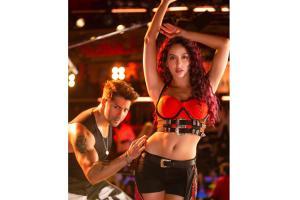 
After impressing the audience with a spectacular trailer and an amazing revamp version of Prabhudeva's iconic song Muqabla, the makers of Street Dancer 3D are all set to release the next song of the the movie, Garmi, featuring Varun Dhawan and Nora Fatehi. Penned, composed and sung by Badshah along with Neha Kakkar, the song will feature the two stars and Varun's troupe in the film show off some sizzling moves.

Talking about the song, Varun said, "Nora brings in a certain energy and vibe to a song. We just played off each other's energy. In my head, Nelly's song, Hot In Herre, was a reference for this track. It's not a song you dance to, but the one you grind to". Varun also shared the poster of the song on his Instagram handle.

Revealing how Nora wanted to exude Beyonce's vibe through the song, the dancing beauty shared, "I wanted to exude a Rihanna-Beyoncé vibe with my look and performance. Also, I wanted the facial expressions and dance moves to be strong and sassy. Varun and I had a blast during the shoot. His swag and my attitude lend it an international appeal, which was what we intended to do ever since we heard the song. This will be a visual treat for the audience."

The Dilbar fame dancer shared a snippet on her social media handle.

All set for the release tomorrow, Garmi is choreographed by Kruti Mahesh and Rahul Shetty.