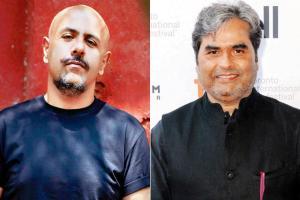 
Vishal Bhardwaj has written and composed a single, Mask Kho Gaya, which has been rendered by Vishal Dadlani. "Interesting times can spur interesting ideas as well as reflect current times," says the filmmaker-composer, who earlier teamed up with the singer on songs like Dhan Te Nan in Kaminey (2009) and Aao Na in Haider (2014).

Describing the video, Dadlani said: "I think it's incredibly powerful. I've watched it about fifteen times so far, and each time, I find something new. There's a lot to be said, and the video is very articulate, and at many levels. I'm deeply proud to be a part of something so relevant and necessary."

The animated music video by Susruta and Saswata Mukherjee features several leaders, including Donald Trump, Imran Khan and Narendra Modi. The song makes a statement about the pandemic and the issues related to it in a funny way.

Also read: Vishal Bhardwaj: There Is No Toxic Culture; All This Nonsense Has Been Made Up