Bharat Ratna and the 'Nightingale of India' Lata Mangeshkar passed away on February 6 morning due to multiple organ failure. She was 92. Today, on her birth anniversary, we take a look at her journey through candid pictures you may not have seen before. All Pictures Courtesy: Mid-day Archives 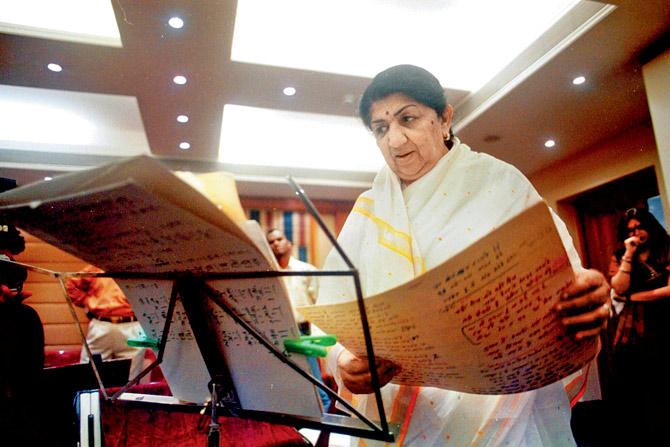 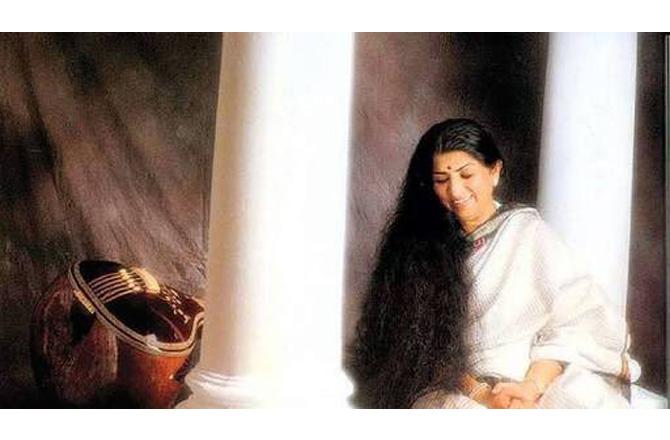 Lata Mangeshkar was only five years old when her father Pt Deenanath Mangeshkar started giving her singing lessons. Subsequently, she even participated in some of his plays. 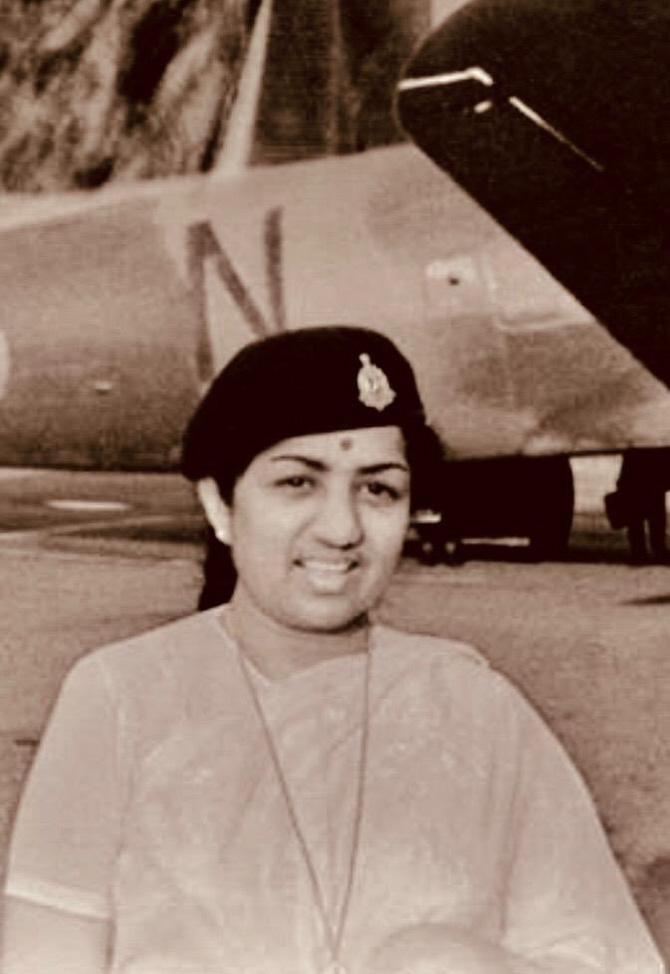 At 13, just as she was about to start her music career, Lata Mangeshkar lost her father. Being the eldest among her five siblings, the responsibility of the family fell upon her and she took the challenge head-on.

Lata Mangeshkar started singing in films and became the sole bread-earner of her family and never looked back, since. She worked hard to support her siblings. 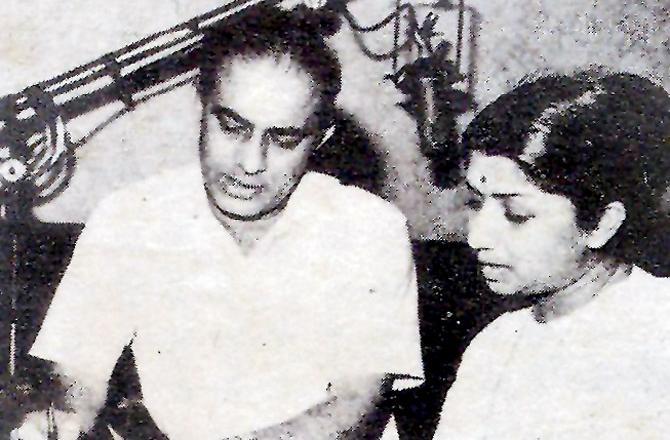 In a career spanning over seven decades, Lata Mangeshkar, the 'Nightingale of India', crooned over 30,000 songs in multiple languages. From her first song Mata Ek Sapoot Ki Duniya Badal De Tu in the 1943 Marathi film Gajaabhaau to Lukka Chhuppi in 2006 for the film Rang De Basanti, Lata Mangeshkar managed to enchant all age groups with her soulful vocal prowess. 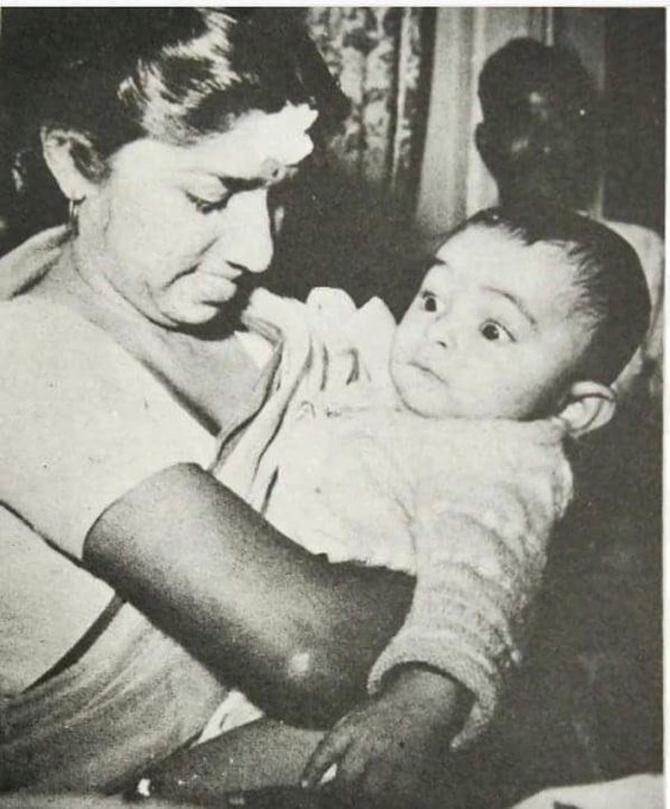 Lata Mangeshkar and Rishi Kapoor collaborated for the latter's debut in Hindi Cinema Bobby in 1973. They went on to do Yash Chopra's Chandni in 1989, another classic known for its music.

In picture: Late actor Rishi Kapoor had shared this vintage photo of himself as a baby being cradled by none other than the incredible Lata Mangeshkar. The legendary singer can be seen holding a baby Rishi Kapoor in her arms as he looks on wide-eyed. Check out the cute photo and the cuter caption below: "Hello Lataji, See with your blessings, I got my picture of my two or three months. Your blessings have always been on me. Thank you very much. May I share this with the world by posting it on Twitter? This is a priceless picture for me," Rishi Kapoor had tweeted. 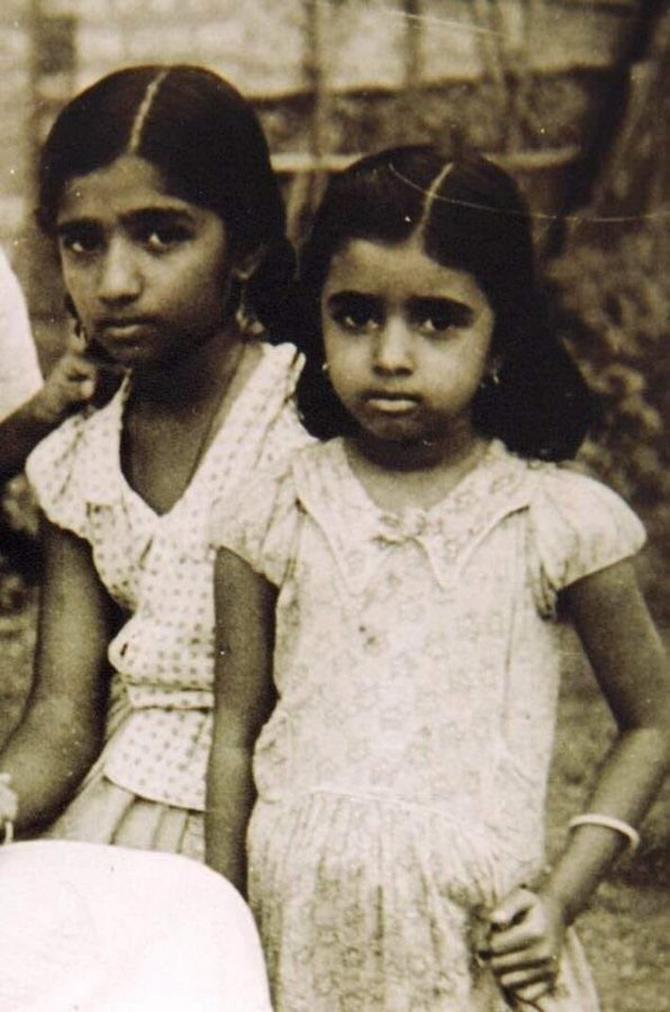 Lata Mangeshkar and sister Asha Bhosle worked together in some very successful and iconic films like Dilwale Dulhania Le Jayenge, Dil To Pagal Hai, and Lagaan. The soundtrack of these blockbusters still remain fresh.

In picture: Amitabh Bachchan had tweeted this adorable photo of the legendary Mangeshkar sisters from their childhood days. In a black and white photo, Lata Mangeshkar and Asha Bhosle can be seen posing in frock and skirt-blouse. 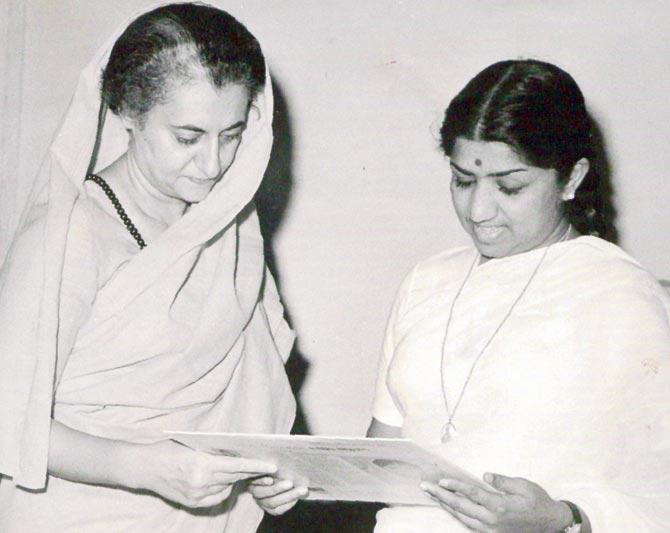 In picture: Lata Mangeshkar tweeted a throwback photo with Indira Gandhi and wrote, "I had a beautiful relation with her. She had keen interest in music. I heard that she was also a good singer. [sic]" 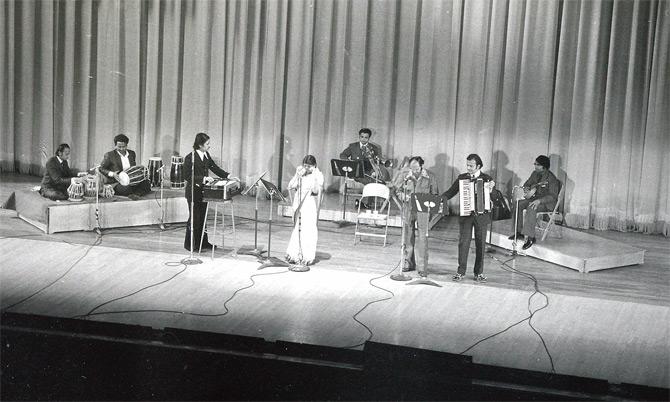 Recalling her younger days memories, Lata Mangeshkar was quoted saying in an interview with IANS: "Everyone has her share of problems in life. Even when I was young and struggling, and I was happy hopping from studio to studio bumping into other strugglers like Kishoreda and Mukesh bhaiyya. Those were fun times even when I had to go hungry for the entire day. There was no money in my purse. But there was only hope in my heart. And the belief that no matter how tough the future looked there was always hope for a better tomorrow." 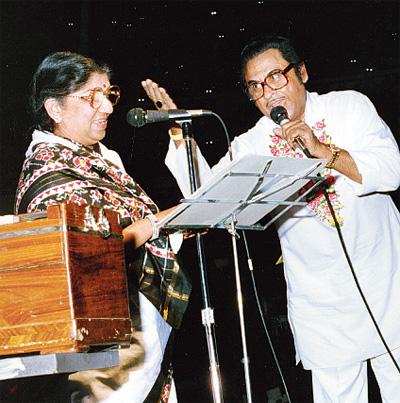 Once during one such hot sweltering day, she had fainted during recording. Setting the record straight about the incident, she said it has wrongly been presumed over the years that Lata Mangeshkar fainted while recording a song with Salil Chowdhary. "No, that incident where I fainted did not happen with Salilda. It happened with Naushad saab," said Lataji.

In picture: Lata Mangeshkar on stage with Kishore Kumar 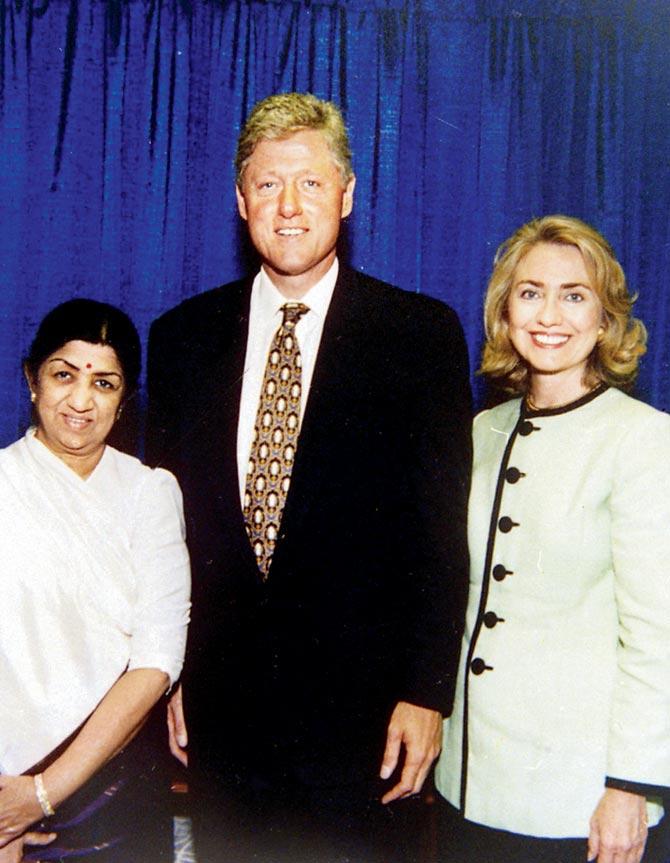 Recalling the incident, Lata Mangeshkar was quoted saying, "We were recording a song on a long hot summer afternoon. You know how Mumbai gets in summer. During those days, there was no air conditioning in the recording studios. And even the ceiling fan was switched off during the final recording. I just fainted."

In picture: Lata Mangeshkar with the Clintons - Bill Clinton and Hillary Rodham Clinton in Chicago, June 1995 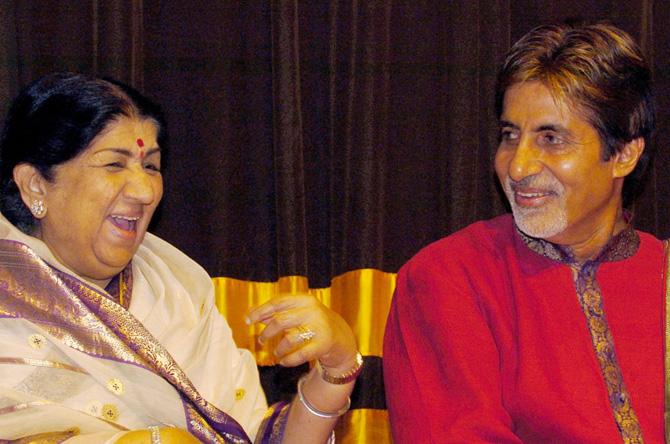 Sharing a funny anecdote of her recording days, Lata Mangeshkar said, "I remember I was recording a duet with Uma Devi who later became the comedienne Tun Tun. Uma Devi was as 'khati-peeti' (well-fed) back then as a singer as she was later as an actress. So there we were, the two of us singing into the same mike. Back then, duets were recorded on one mike. Me, a frail reed-like pint-sized girl, she quite formidable in her physical appearance. I was given a stool to stand on, as I had a problem reaching the mike. I sang my lines and then when Uma Devi moved forward to sing into the mike and nudged my shoulder, I fell right to the ground."

In picture: Lata Mangeshkar (L) shares a light moment with Amitabh Bachchan at the annual Dinanath Mangeshkar Memorial awards function in Mumbai on April 24, 2005. Bachchan was awarded one of the memorial awards for his contribution to the Indian film industry and the society. 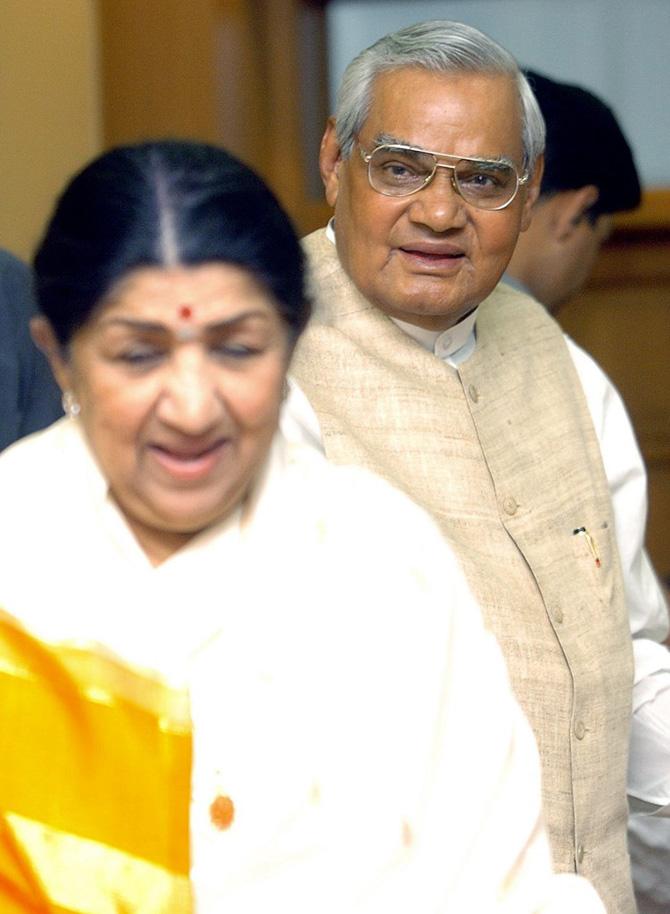 Lata Mangeshkar used to enjoy recording the most with Kishore Kumar, whom she fondly called 'Kishoreda'. Recording with him was like one whole session of fun and games for Lataji. "He would make me laugh so much, I could barely sing. I had to stop him. Kishorda, pehle gana phir masti. (first song, and then fun)'. It was especially problematic when we were singing sad duets. Instead of tears of grief, my eyes would be tearful with laughter," shared the singer.

In picture: Atal Behari Vajpayee (R) smiles as Lata Mangeshkar (L) passes by during the release of cassettes and CD of poems written by Vajpayee and sung by Mangeshkar in New Delhi on March 30, 2004. 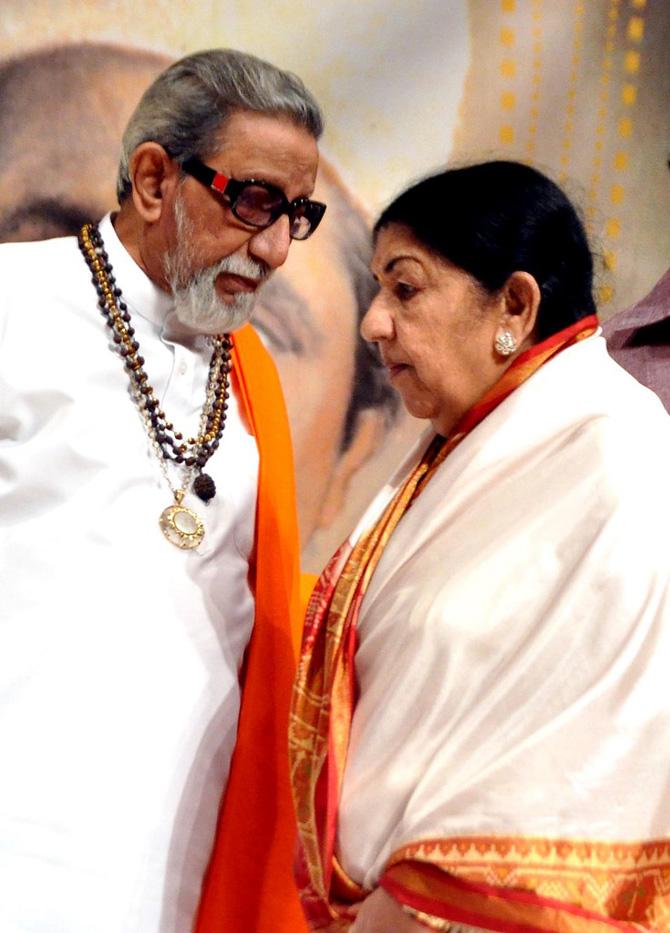 Her grief-stricken songs made an impact on the audience so much that it is said the whole congregation at the recording wept when Lata Mangeshkar sang Madan Mohan's Heer in Heer Ranjha and Sachin Dev Burman's Tum mujhse dur chale jana na in Ishq Par Zor Nahin. 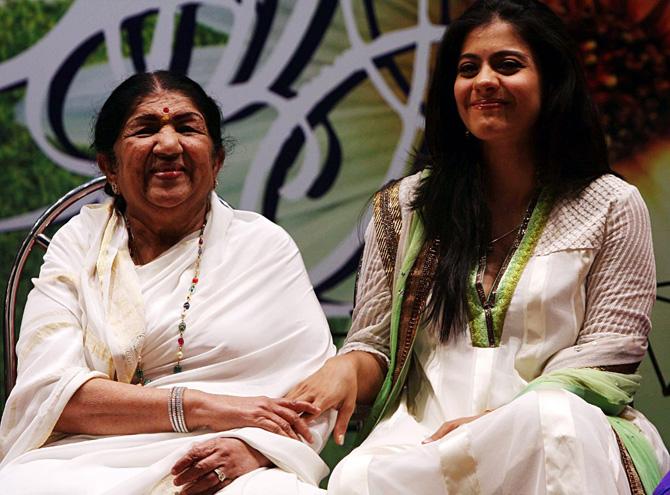 However, ironically, Lata Mangeshkar confessed that she had never been a weeper even when singing the most sombre songs. The legendary singer always preferred laughter to tears. But, she cried the most when she lost her father and her mother.

In picture: Lata Mangeshkar receives an award in the company of Kajol in Mumbai on April 24, 2010. 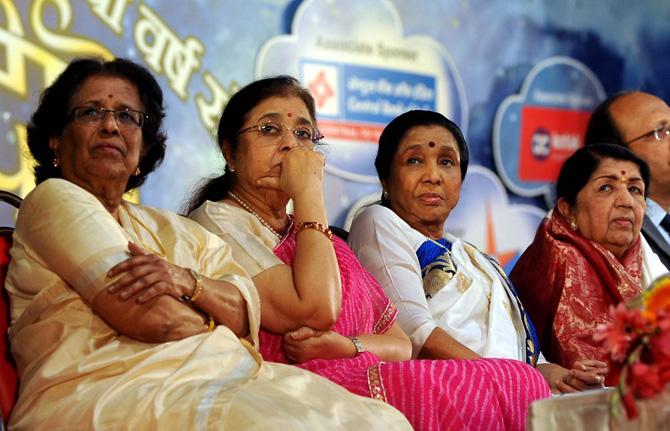 Apart from Lata Mangeshkar, the Mangeshkar family has given the country other musical gems. Asha, Usha, Meena and Hridaynath are all renowned artistes and have even worked together in several projects. Who can forget Asha and Lata's soulful duets "Main chali main chali" (Padosan), "Aankhon ankhon mein" (Janwar) and "Man kyun behka re" (Utsav). 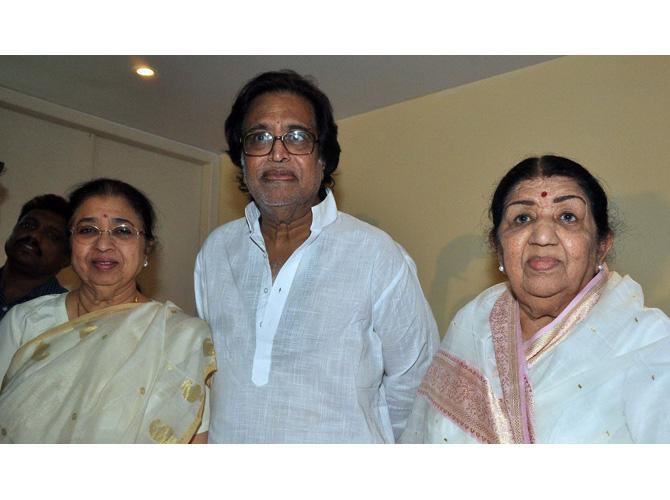 Not only with Asha, Lata Mangeshkar has also collaborated a lot of times with her younger brother Hridaynath, fondly known as Balasaheb in the music and film industry. Hridaynath made his debut as a music director in 1955 with the Marathi film "Akash Ganga". He has composed for many Marathi films like "Sansar", "Ha Khel Savalyancha", "Janaki", Jait Re Jait and "Nivdung" and a few Bollywood films like "Lekin..." and "Maya Memsaab". He also produced Ghalib, an album of Mirza Ghalib's ghazals, which were sung by Lata Mangeshkar.

In picture: Lata Mangeshkar (R), along with her brother, composer and music director Pandit Hridaynath Mangeshkar (C) and her sister, singer Usha Mangeshkar pose during a press conference to announce the award function of her father's 'Deenanath Mangeshkar Puraskar Awards' at her residence, in Mumbai on April 14, 2012. 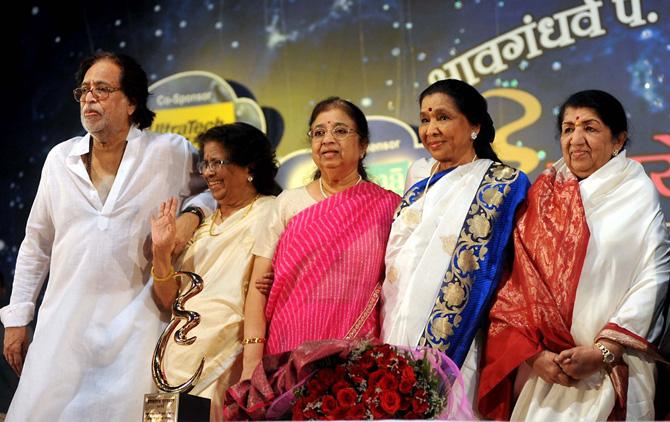 "I am Didi to many in the film industry and across India, but on Raksha Bandhan, I tie a rakhi only to my brother Hridaynath. I've doted on him from the time he was born. I was almost like a second mother to him when he was a child - singing him to sleep, feeding him his meals, dressing him up for school," reminisced Lata Mangeshkar. 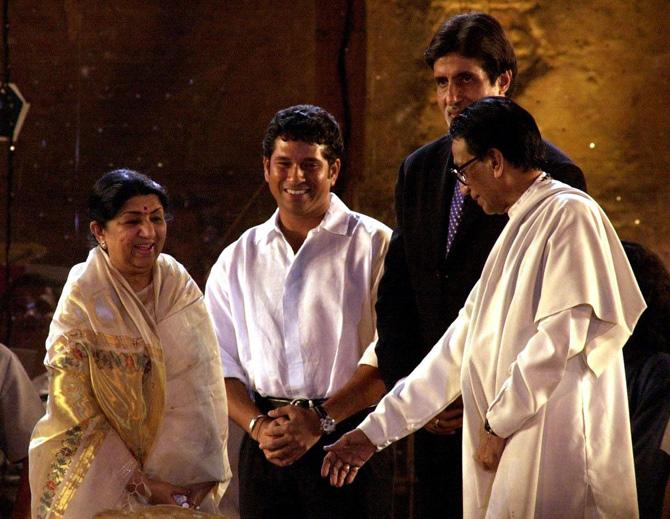 In picture: Lata Mangeshkar (L) being welcomed by Bal Thackeray Shiv Sena chief (R) on March 5, 2001, at a concert in aid of the Gujarat earthquake victims held at the Shivaji Park grounds in central Bombay. Looking on is cricket master blaster Sachin Tendulkar (2nd L) and megastar Amitabh Bachchan.