Aamir Khan`s latest release Laal Singh Chaddha has had an underwhelming time at the box office. The big-ticket film, which also stars Kareena Kapoor, Mona Singh, and Naga Chaitanya, has failed to cross ₹50 crore in its first six days of release. The film is the latest in a long line of Bollywood films that have failed at the box office of late. Recently, actor R Madhavan talked about this trend and also the comparative success of films from the south

Anjali Arora, Stebin Ben & Others At A Cruise Party 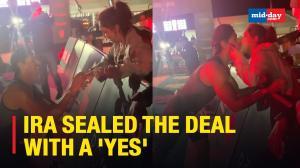 Zorawar Kalra: My Son Didn't Want Me To Embarass Him | Jhalak Dikhhla Jaa

Dhanashree Verma: I Don't Have The Stamina To Get House Arrested Again