Actor Tiger Shroff turns singer for `Miss Hairan`- a song from his upcoming action-drama `Heropanti-2`. At the song launch event, which was also attended by actress Tara Sutaria and director of the film Ahmed Khan, the actor sang the song live. He also mentioned that he is singing and dedicating the song to his lead actress, Tara Sutaria. Further, the cast and director share their experience while working together and hint at an action-packed entertainer for the audience.

Which Is Amandeep Kaur's Favourite Look From Vicky Kaushal And Katrina Kaif's Wedding?

Rakhi Sawant Thanks Salman And Shah Rukh Khan For Their Support 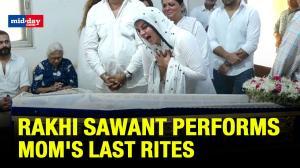 Rakhi Sawant Breaks Down During The Last Rites Of Her Mother

Salman Khan, Abdu Rozik And Others At Rrahul Kanal And Dolly’s Wedding & Reception

Munawar Faruqui On Pathaan’s Success and His Upcoming Song

Rakhi Sawant Thanks Salman And Shah Rukh Khan For Their Support

Rakhi Sawant Breaks Down During The Last Rites Of Her Mother