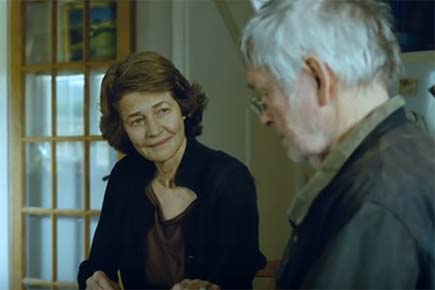 The film takes a serious look at the institution of marriage through the eyes of an ageing couple in the throes of celebrating their 45th year of matrimonial togetherness.

There is just one week until Kate Mercer's (Charlotte Rampling) 45th wedding anniversary and the planning for the party is going well. Geoff (Tom Courtenay) has all but become an antisocial homebody who rarely takes a walk outside the premises of their comfortable home. A letter arrives for him and things begin to be go awry between the couple. The ensuing conversation reveals the discovery of something long forgotten. The body of Geoff’s first love, Katya, has been discovered in the Swiss alps and the police in Switzerland chose to inform him.

Kate is curious about that. Geoff reveals that he and his love had falsified the truth a little by claiming to be married then. That does not shock Kate much given the time frame of the event and the conservative attitudes of the past. But Geoff’s continuous preoccupation with the past following the receipt of the letter makes her question the very validity of their marriage and the so-called love that determined it’s long lasting existence. In a telling statement, Geoff off-handedly remarks of the near intact youthful state of the body and how it has not aged despite the near 50-year period since the event - comparing it wistfully to his own withered, ageing and diminished capacities. He even goes to the extent of borrowing books on climate change from the library to figure out when it would be possible to recover the body from the icy glacier it was buried in. Kate, of course, is befuddled by his new found interests in resurrecting the past. Was their marriage a lie? But Kate is quick to lay low that belief with a self-esteem raising confrontation in which she specifies her understanding of herself being enough for Geoff while questioning whether he understood that or not. By the time the party is upon them, five days later, things could get so frayed between the two that there might not be anything left to celebrate.

A sort of British ‘Amour’ this wonderful film that rarely goes beyond the four walls of the home has keenly calibrated soulful performances from both the leads. Rampling and Courtenay (deserving winners at Berlin for this film), both stars from the '60s , prove they still have what it takes to shake our worldly beliefs. Filmmaker Andrew Haigh allows the veterans to their moves at their pace, while incrementally revealing the tension that develops between the two. The fissures in their relationship are shown in an intricately nuanced layering that involves routine chores and social interactions.

As Kate embarks on her daily chores like taking her dog out for a walk and organising the event, we begin to discover her inner turmoil reflected in images of herself in the mirror and hesitancy to pick an expensive watch as a gift to commemorate the occasion. Space is used beautifully to shadow the distance between the two individuals within the frame. And music enhances the wistfulness and yearning just as it does the dawning of understanding and relative values. The choices are so appropriate that the intrusion of song feels almost divine. This one’s a must-see for all married couples irrespective of age!

Next Story : '13 Hours: The Secret Soldiers of Benghazi' - Movie Review