'Ricki and the Flash' - Movie Review

It's been thirty years since Meryl Streep's been appearing in movies and not once has she rendered a performance that seemed like she didn't put any effort in it. Even in forgettable movies Streep remains the only aspect worth remembering 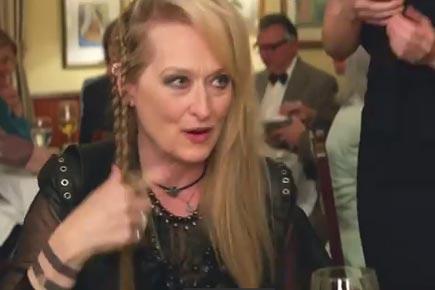 What is it about Meryl Streep that makes her such a magnetic presence on screen? Is it her face? The way she walks? The way she has every single syllable of every single word of every single dialogue under absolute control? It's been thirty years since she's been appearing in movies and not once has she rendered a performance that seemed like she didn't put any effort in it. Even in forgettable movies Streep remains the only aspect worth remembering.

Watch the trailer of 'Ricki and the Flash'

Another film that is sort of overall mediocre but has yet another unforgettable performance from Streep is this week's 'Ricki and the Flash'. The film is directed by Jonathan Demme, the famously reclusive filmmaker who has made such classics as 'The Silence of the Lambs', 'Philadelphia' and 'Rachel Getting Married'. Demme's name is itself worth investing some interest in the film but to pair his talent with Streep's takes things to another level.

The story is very interesting - Linda (Streep) is kind of bored of her life as a suburban housewife with three kids and an 'ok' husband Pete (Kevin Kline). She forgoes her lifestyle to run away and chase her dream of becoming a rock star. Years later she is now called Ricki and is a performer at a local bar at night, and a cashier by day, and also on the verge of bankruptcy. One day she gets a call from her ex husband Pete to come home and take care of their daughter Julie (Mamie Gummer) because his current wife is out of town. Ricki walks in wearing her punk rocker clothes and an empty shell of her life into a big luxurious house full of love. Naturally, sparks fly.

The film is written by Diablo Cody who is responsible for the excellent 'Juno'. Unfortunately the film wears its welcome on its sleeve, and fails to live up to its potential. One expects a gripping drama about a woman coming to terms with what she has lost in life, but instead you get a schmaltzy and predictable drama full of clichéd lines and manipulative narrative. Everyone is lovable in the film, which makes it hard to believe these characters are real. The ending is as disappointing as it is improbable, making you wonder what the point of all of it was. There's no lesson to take away from the film, then why inject a dramatic element in the story at all?

As mentioned above, Streep is the only element worth watching the film for, but there's only so much of 'Streep pretending to be a failed rocker' one can take.