Aquaman 2 to release in December 2022 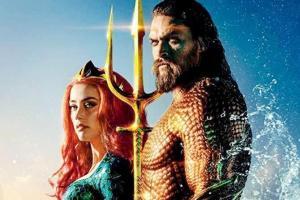 The studio took the first step toward "Aquaman 2" earlier this month by bringing back David Leslie Johnson-McGoldrick to write the script. "Aquaman 2" will be produced by "Aquaman" director James Wan and Peter Safran.

"Aquaman" garnered USD 330 million in North America and USD 805 million internationally, led by nearly USD 300 million in China. It is currently the 20th highest worldwide grosser of all time.

Johnson-McGoldrick teamed with Will Beall on the "Aquaman" script, from a story by Beall, Geoff Johns, and Wan. Johnson-McGoldrick began working on the screenplay three years ago after reading "Aquaman" comic books while on the set of Wan's "The Conjuring 2".

p>This story has been sourced from a third party syndicated feed, agencies. Mid-day accepts no responsibility or liability for its dependability, trustworthiness, reliability and data of the text. Mid-day management/mid-day.com reserves the sole right to alter, delete or remove (without notice) the content in its absolute discretion for any reason whatsoever

Next Story : Cuaron does not believe Netflix pushback cost Roma its Best Picture