The Black Eyed Peas have been inspired by Indian culture from the beginning of our career... From Asha Bhosle to AR Rahman, Indian music has influenced our songs on more than one occasion, the group said describing their video 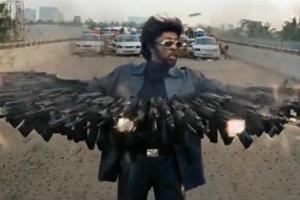 
American music group 'The Black Eyed Peas' have paid tributes to the extravagant action sequences in Indian cinema with their latest video "Action", which features popular scenes from films including Rajinikanth's sci-fi actioner "Robot" and Ajay Devgn-starrer cop drama "Singham". The 4.48-minute-long video has been created by using the 'deep fake' technology that allows users to replace people in an existing image or video with their own likeness. Group members will.i.am, apl.de.ap and Taboo feature in the cycle sequence of "Maryada Ramanna", the gun sequence of S Shankar's "Robot", the firing sequence from the Swedish movie "Kopps" and "Singham", superimposing their faces on actors Sunil, Rajinikanth and Devgn.

"The Black Eyed Peas have been inspired by Indian culture from the beginning of our career... From Asha Bhosle to AR Rahman, Indian music has influenced our songs on more than one occasion," the group said describing their video. "This video for ACTION shows our LOVE and appreciation for BOLLYWOOD and the imagination and awesomeness it brings to the screen... Thank you INDIA & BOLLYWOOD!!!" they added.

The members, whose real names are William James Adams Jr, Allan Pineda Lindo, and Jaime Luis Gomez, respectively, also listed the movies that have inspired their video: SS Rajamouli's "Maryada Ramanna", "Robot"/"Enthiran", Sundar C's "Aambala", Rohit Shetty's "Singham" and "Kopps", directed by Lebanese-Swedish filmmaker Josef Fares. will.i.am share the video on Twitter, writing, "Check out our video for #ACTION inspired by #BOLLYWOOD¿ I've always loved music from India¿ #Elephunk and #MonkeyBusiness were inspired by Indian Culture¿thank you India for your vibrancy and contribution to the world¿" Devgn wrote to will.i.am, saying: "This is a super-enjoyable track. Good stuff." AR Rahman, who scored the music for "Robot" and its sequel "2.0", tweeted his appreciation to will.i.am, "The borders are blurring through art! #tamilcinema @directorshankar #rajnikant #india."

"Action" is also a tongue-in-cheek comment on fake news, cautioning people to not trust everything they see on their screens. "We are living in very confusing times... We have smart phones and we do dumb things on them¿ We have Artificial Intelligence but we can't tell Fake news from Facts¿ If we can't handle Fake news!!! How can we handle the Deep Fake??? Don't trust the screen," the message, appearing like the "Star Wars" opening credits, at the end of the video reads. The clip also began with a "warning": "this video was made with DEEP FAKE technology... Do not believe everything you see..."