Chadwick Boseman on 21 Bridges: My character is a complex figure 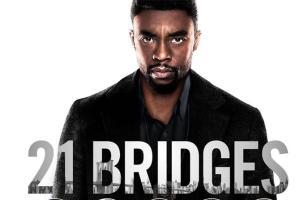 
One of the most anticipated movies of the year, 21 Bridges, starring Chadwick Boseman, is all set to release in India on November 22, 2019. Produced by the Russo Brothers, the movie revolves around a NYPD detective who leads on a citywide manhunt for a pair of cop killers.

Chadwick Boseman confirms that playing the character of Andre Davis is a complex figure. "Andre has prepared his entire life to be a cop," the Black Panther star explains. "Andre's father, a policeman, was killed in the line of duty when Andre was just 13, so he has grown up with this unsettled murder of his dad. Over the years, Andre has become determined to not only avenge his father's death but those of any cops he has served with."

As Chadwick Boseman indicates, the filmmakers were focused on fine-tuning the character of Davis and giving him as much texture as possible. Brian Kirk, the director of the film comments "Chadwick wanted Davis to be a layered and unexpected hero. We, along with screenwriter Matt Carnahan, working off initial drafts from screenwriter Adam Mervis, wanted to bring out Andre's honesty, bravery, and intelligence. He's a warrior with a purpose. A detective with a code, Chadwick brought everything to the table to realize the character's potential."

Adding to this, Brian said, "Joe and Anthony godfathered me through the numerous challenges of making a film of this scale, they helped me create an environment where the best idea always wins. I drew inspiration from them throughout the film's development, production and, especially, during post-production" concludes Kirk.
Catch the thriller, 21 Bridges on 22nd November in cinemas near you.

Next Story : Suhana Khan makes her acting debut with the film, The Grey Part Of Blue