Tony Vinciquerra, Chairman and CEO of Sony Pictures Entertainment, called Trebek a "legend and a beloved member of the Sony Pictures family" in a statement to the outlet. 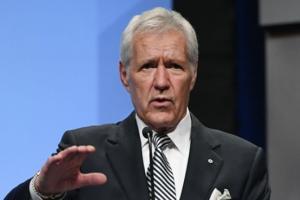 
Long-time host of popular American game show 'Jeopardy!' Alex Trebek died at the age of 80 on Sunday morning, over a year after being diagnosed with pancreatic cancer, the show confirmed.

"Jeopardy! is saddened to share that Alex Trebek passed away peacefully at home early this morning, surrounded by family and friends. Thank you, Alex," the show tweeted.

Trebek, who had hosted Jeopardy! for almost four decades, first announced on air in March 2019 that he had been diagnosed with stage IV pancreatic cancer, reported The Hill.

"Just like 50,000 other people in the United States each year, this week I was diagnosed with stage 4 pancreatic cancer," Trebek said.

Despite his condition, he continued to film episodes for the game show while undergoing treatment for cancer, and returned to host the show's 36th season during the summer last year.

Tony Vinciquerra, Chairman and CEO of Sony Pictures Entertainment, called Trebek a "legend and a beloved member of the Sony Pictures family" in a statement to the outlet.

"For 37 amazing years, Alex was that comforting voice, that moment of escape and entertainment at the end of a long, hard day for millions of people around the world. He was the heart and soul of 'Jeopardy!' and he will be deeply missed by everyone who made him part of their lives," he said.