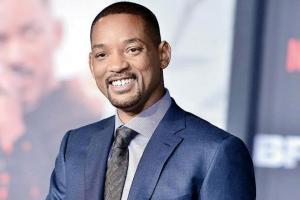 
Will Smith - Tom Holland starrer forthcoming animated feature 'Spies in Disguise' has added Rachel Brosnahan along with Reba McEntire to its cast. The two have joined the cast which also includes Ben Mendelsohn, Karen Gillan, Rashida Jones, DJ Khaled and Masi Oka, according to The Hollywood Reporter.

McEntire is an appreciated American singer who has 15 American Music Awards and three Grammys in her name. She is also a recipient of the Kennedy Center Honor.

Meanwhile, Brosnahan is an Emmy and Golden Globe award winner who is prepping up for the third season of the Amazon show 'The Marvelous Mrs Maisel'.

'Spies in Disguise' trailer which released earlier in July, featured Smith leading the cast as Lance Sterling, a smart, debonair spy whose mission is to save the world. Holland will be seen playing Walter, a great mind and a cute young scientist. The forthcoming feature is based on Lucas Martell's 2009 animated short film 'Pigeon: Impossible' and is produced by Fox Animation, Blue Sky Studios and Chernin Entertainment.

Troy Quane and Nick Bruno are co-directing the script penned by Brad Copeland with Michael J Travers producing it. The animated feature will hit the theatres on Christmas this year.

Next Story : 'Traditional film-making becoming a Dinosaur in age of streaming'