Spiderman Movie Review - A triumph of style and substance

Spider-Man: Into the Spider-Verse is a highly inventive, unique and stimulating experience. Characters have a solid relatable foundation and the tone, gags and dramatic beats make their mark felt. 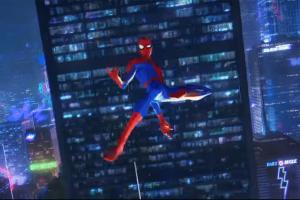 Still from the trailer

Spider-Man: Into the Spider-Verse is a highly inventive, unique and stimulating experience. The team entrusted with this creation appears to have caught on to the multiplicity of the extended comic-book universe and this resultant Spider-Verse is clever, daring and works-in multiple levels of fun. The form is dynamic, the content is layered and the spirit on display is clearly excitable. Characters have a solid relatable foundation and the tone, gags and dramatic beats make their mark felt. This big screen debut of Miles Morales, the black/Latino Spidey, is a strong case for diversity under the garb of routine heroics. Miles (Shameik Moore) is a mixed race Brooklyn kid going to a private school he hates. His hard-working parents, dad, a cop (Brian Tyree Henry) and mom, a nurse (Lauren Velez) are typically middle-class in their efforts to bring up their son as a good American boy.

The family construct itself moves away from the known. There is so much happening here - venerating the legendary traits of the superhero with young and old avatars that take that lineage to different dimensions. Spider-Gwen (Hailee Steinfeld); Spider-Man Noir ( Nicolas Cage); Spider-Ham (John Mulaney), Peni Parker (Kimiko Glenn), and an older, less-motivated Peter Parker inhabiting the supporting cast of characters here.

The plotting is a super surprise and the writing complements the expansiveness of this spider-verse. Miles is the main focus here – the supporting Spider-characters add their wee little bits to the overall entertainment quotient. The wit is effervescent, there are several in-jokes catering to the die-hard fans and the action is peppered with innovative slapstick. The writing and voicing are excellent but the animated visuals make the strongest impact. The comic book aesthetic can be felt all throughout the experience. The multidimensional onslaught is well represented and the styles, color, design and character forms add vivacity to the thrills. This is truly a homage to the idea that Spider-man represents –a multi-cultural idiom of ideas segued together to represent and celebrate the differences in identity and gender.

Also Read: Spider-Man: Into The Spiderverse Has Many Cameos And The Names Will Surprise You!