One cant fault Drew Barrymore for sincerity, but her range is limited, unlike her acting chops. In her promising bits, she discusses the experience of a black author with great passion. 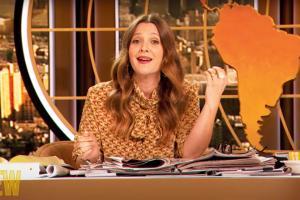 How does someone, who has lived in front of the camera for four decades, have anything new to offer? The brilliance of Drew Barrymore's eponymous show, which premiered in September in the US, is simply that the actor-host never ceases to surprise you. She frequently doles out corny lines, and her stories are bizarre; yet, you are sold to her over-the-top behaviour because it's straight from the heart. Episode after episode, Barrymore flashes her sunny smile and gives us a dose of her cheery positivity."

The outing, however, lacks the depth that peer Ellen DeGeneres offers on her chat show. Many of her celebrity friends, from Anne Hathaway to Reese Witherspoon, make an appearance on Barrymore's couch. What could have been an insider's gaze into the real lives of the rich and the famous — stripped off of its glamour, and looking at the punishing demands of stardom — barely rises above being an insipid chat as the host and the celebrity guest fawn over each other. Charlize Theron was the only guest who drew me in as she and Barrymore discussed alcoholism with unabashed honesty. One can't fault Barrymore for sincerity, but her range is limited unlike her acting chops. In her promising bits, she discusses the experience of a black author with great passion.

It's hard to imagine Barrymore signing up to become background noise at my dinner table when she can command the attention of the room. After each episode, I was left wanting to see more of the person behind the star, the fractures and flaws — her troubled childhood, history of drug abuse, attempted suicide — that she so carefully glosses over. Throughout the show, I had the nagging feeling that I was on the fringes of her universe. But it also offers the promise that some day, she will let the garb slip and allow us into her world.

Next Story : Priyanka Chopra Jonas and family are craving for some Californian sun