Woody Allen: Done everything #MeToo movement would want to achieve

In an interview with a French outlet, Woody Allen reiterated that in his 60-years-long career, he has never been accused of inappropriate behaviour by the female actors and he has always treated them at par with their male counterparts. 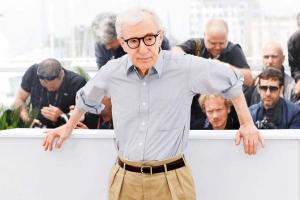 
Embattled filmmaker Woody Allen says he does not regret his 2018 statement where he had claimed that he should be the poster boy of #MeToo movement. In an interview with a French outlet, Allen reiterated that in his 60-years-long career, he has never been accused of inappropriate behaviour by the female actors and he has always treated them at par with their male counterparts.

"I should be [poster boy #MeToo movement]. I've worked with hundreds of actresses, not one of them has ever complained about me. I've employed women in the top capacity for years and we've always paid them the equal of men," Allen said.

"I've done everything the #MeToo movement would love to achieve," he added. Allen is currently in France to promote his troubled directorial, A Rainy in New York, which is set to premiere at the Deauville American Film Festival before hitting the French theatres on September 18.

A Rainy in New York, which features an ensemble cast of Timothee Chalamet, Elle Fanning, Selena Gomez, Jude Law, Diego Luna and Liev Schreiber, was earlier set to be distributed in the US by Amazon Studios. But after Allen's interview with an Argentinian news outlet, where he said he should be the "poster boy" for the #MeToo movement, the studio terminated its four-movie contract with the director.

"To me the movie is being released all over the world. If people enjoy the movie, I think it will eventually be released in the US. But it doesn't matter to me. Once I have finished it, the fate of the movie is out of my hand," the director said.

There is a renewed focus on Allen, who has been accused of sexual abuse by his adoptive daughter Dylan Farrow. Two days ago, actor Scarlett Johansson, who worked with Allen on three films, offered support to him. "I believe him, and I would work with him anytime. I have been direct with him, and he's direct with me. He maintains his innocence, and I believe him," said Johansson in an interview.

Next Story : Jessica Chastain: McAvoy was always a proponent of equal pay