Bombshell may not seem deep in retrospect but its certainly very thorough and eventful! 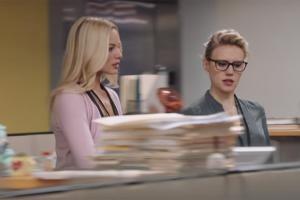 A still from Bombshell

Charlize Theron, Nicole Kidman, and John Lithgow play, Megyn Kelly, Gretchen Carlson and Roger Ailes, respectively, in Jay Roach's film about sexual harassment at Fox News, while Margot Robbie's Kayla is an add-on composite that is brought on to exemplify the sexploitation of the numerous aggrieved women from the network. So, this is a true story with a few creative liberties taken -- but that does not take anything away from the effectiveness and power of its denouement.

Roach's narrative gives us a wide expanse of the workings and behind-the-scenes scenario of the cable television establishment better known as Fox Television - the channel that Trump depended on the most for his 2016 Presidential nomination from the Republicans. The events highlighted here happens around that same period. Gretchen Carlson( a sweetly compelling Nicole Kidman) brings her lawsuit against Ailes ( a physically transformed John Lithgow) and much later, Kelly and Kayla chip in with their own versions of the trauma they had to undergo to stay in the reckoning at the channel -- and the horror gets compounded. From a intriguing opening, Roach steadily masterminds tension as the ongoing expose gains tempo and heft with some astonishingly vivid (Margot Robbie) and physically accurate performances ( Charlize Theron) -- both of which are likely to capture the jury's imagination for Oscar nods. Even the supporting performers do dead-on feel-a-likes.

It's Ailes' firing of the somewhat older reporter Carlson, that triggers the Domino effect here. Despite a big payout, Carlson retaliates by hiring the best lawyers and filing a sexual harassment lawsuit - which in turn becomes the impetus for numerous other women, to come forward with claims against the big boss.

Roach employs picture-perfect production design( the newsroom and its culture look real and incredibly vivid) and brings grit and gumption to his telling with seamless inserts of actors into 'real' images, hand-held camerawork and quick-zoom-ins. Coupled with acutely accurate costume design by Colleen Atwood, it helps keep the audience unsettled throughout this emotional, cultural and financial reveal of newsroom mechanics. This may not seem deep in retrospect but its certainly very thorough and eventful!