Bumblebee begins with an overly long-drawn re-tread of the animated Transformers: The Movie, and then plunges into establishing Charlie's circumstance without generating much effect. 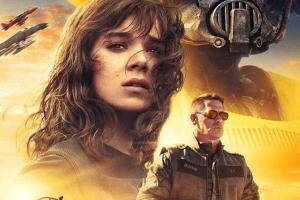 While the Transformers series that came before this targeted a mixed demographic, Bumblebee, the first live-action Transformers movie to be directed by somebody other than Michael Bay, is consciously targeted at the YA generation looking to get high on tech dominion married to big-ticket action.

This Travis Knight version may come as a relief after the overpowering bluster of Bay's six editions but it's still not satisfying enough nor does it deliver a craving for more.

It's 1987 and Bumblebee the Autobot escapee from Cybertron planet, seeks refuge in a junkyard in a small California beach town. Charlie(Hailee Steinfeld), on the brink of turning 18, having the usual problems with family and sociability, soon discovers the battle-scarred and broken Bumblebee. Charlie and Bumblebee aka B-127 become fast friends, while her concerned mother Sally (Pamela Adlon) and wannabe step-dad Ron (Stephen Schneider), and infuriating younger brother Otis (Jason Drucker) play out their anointed concerns. Bumblebee's troubles are compounded by new Decepticon arrivals Dropkick (Justin Theroux) and Commander Shatter (Angela Bassett, in the series' first female Transformer role) and their forged partnership with leaders of Sector 7 and a suspicious Jack Burns(John Cena) who was witness to B-127's unlawful entry into Earth.

Bumblebee begins with an overly long-drawn re-tread of the animated Transformers: The Movie, and then plunges into establishing Charlie's circumstance without generating much affect. Familiarity they say breeds contempt and that's what generally happens here with much of the action and drama feeling far too familiar and therefore boring. Though the narrative blast lasts around 113 mins, it feels too lengthy and other than in its climactic moments, there's hardly any adrenaline rush to be had here. The formula happens to have lost its edge and the screenplay by Christina Hodson can do little to improve the nature of emotional distention here. Hailee Steinfeld does lend some empathy to her role but it's all too capricious to amount to anything heart-tugging!

Also Read: Here's What The Crew Of Bumblebee Have To Say About The Director Travis Knight

Next Story : Jennifer Lopez opens up about bond with Leah Remini