Gringo is nastily violent and has a tone that is acerbic rather than spiced-up. And the sharp cast makes a meal of their meanness. 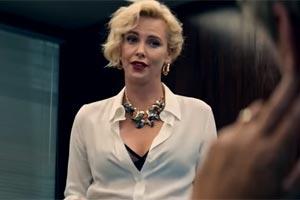 A corporate crime tale that plays off in drunken comedic thriller fashion, this one is rough, a little jumbled up and has it's protagonist be the underdog who gets cheated, robbed, double kidnapped, pursued by drug-lords etc., etc. and yet stay alive and kicking. The film is nastily violent and has a tone that is acerbic rather than spiced-up. And the sharp cast makes a meal of their meanness.

Harold(David Oyelowo), whose mid-level job at a Chicago pharma company is courtesy the company's co-president, his best friend Richard(Joel Edgerton), hears a rumor that the rug is about to be pulled out from under him – just when his debts due to a high maintenance wife(Thandie Newton), have mounted to un-scalable. Elaine( Charlize Theron) the other co-president, essaying the role of a corporate whore of sorts, is cut-throat and ready to sacrifice every pawn to win herself the big prize – including Richard and a nice big wallet of notes for the merger of her company to a conglomerate. There are far more complications added on including drug lords and their peculiar ways of resolving issues. Harold is in deep-trouble and needs to come up with a suitable solution to save his career but unfortunately for him everyone else is thinking of the same route to prosperity.

None of the characters ring entirely true or whole but the actors play them with such spirited fun that it's hard not to get involved. Oyelowo keeps Harold alive, Seyfried makes her incidental character Sunny winsomely straight-forward, Theron is calculatedly vicious as Elaine, Joel Edgerton as the sharky Richard, goes for the suave route and pulls it off neatly enough and Sharlto Copley as Richard's former-mercenary brother Mitch makes it more fun than business. The director though, fails to make the tone consistent or edgy.

And the editors (three of them) fail to draw out a coherence that could be meaningful. Of course the scripting is a little too far-fetched and predictable but that's a given in such sub-genres. It also takes a lot to understand the underhand deals going around here what with the flash-back set-up making it that much more difficult to comprehend. The multiple plot threads messes up the narrative disallowing cohesion and the lack of streamlining in the structure loses out on all the excitement. This could have been a far more wilder and exciting ride but all it can manage to be is fairly pleasant and engaging!

Next Story : Maelstrom Rising to get film adaptation