Many surprises and snubs in this year's first in-person gala, 93rd Academy Awards 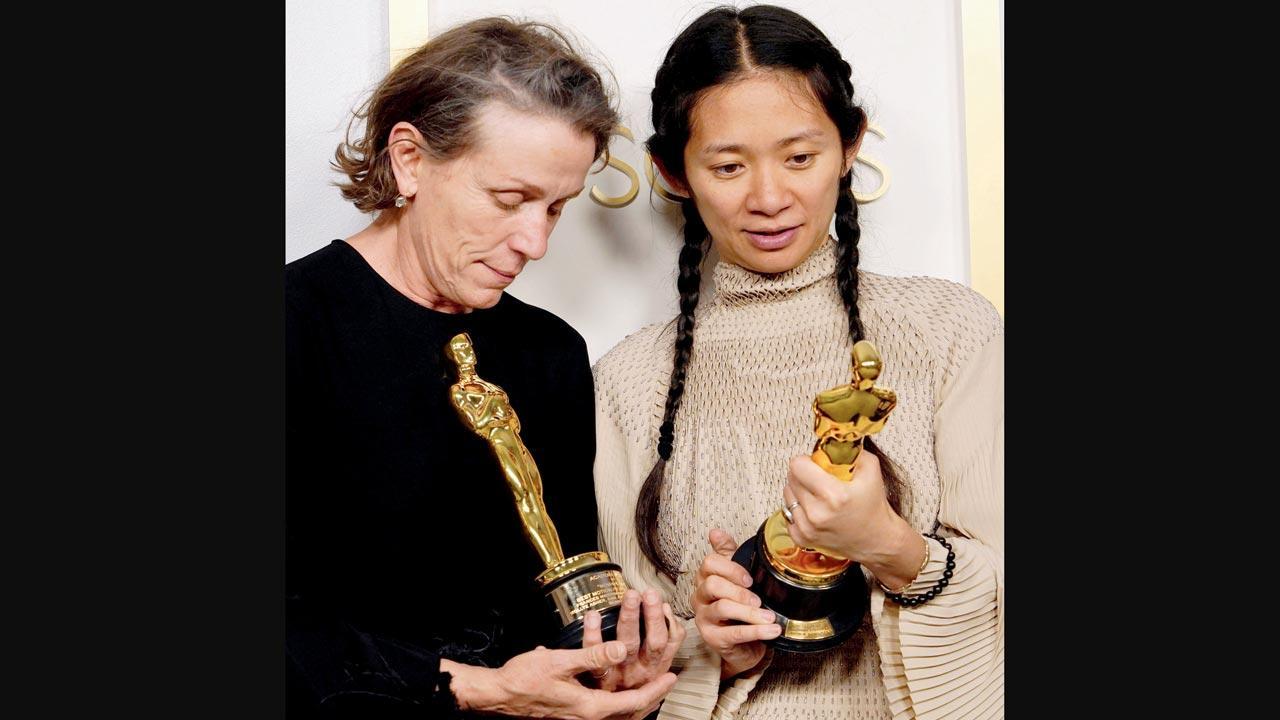 Producers Frances McDormand and and Chloe Zhao, hold the Best Picture award for "Nomadland" as they pose in the press room at the Oscars on April 25, 2021, at Union Station in Los Angeles. Pic/AFP

Frances McDormand won the Best Actress title for Nomadland, which also nabbed Best Picture, for director Chloe Zhao. Zhao is only the second woman to win the title, and the first woman of colour to do so in Oscar history. Ironically, her win wasn’t celebrated in China, her homeland, where her name was either censored or downplayed by the Chinese government. She was apparently shunned for remarks made in a 2013 interview.

Pippa Ehrlich, left, and James Reed pose in the press room with the award for best documentary feature for "My Octopus Teacher" at the Oscars on Sunday, April 25, 2021, at Union Station in Los Angeles. Pic/AP, PTI

My Octopus Teacher, the tale of an eight-limbed creature and her human companion, won the Best Documentary title. It was 10 years in the making, and started as a personal video project by South African filmmaker Craig Foster, who aimed to rekindle his connection with nature by observing an inquisitive female mollusc near Cape Town. Indian environmentalist Swati Thiyagarajan was the production manager on the project. Directors Pippa Ehrlich, and James Reed took the gong.

Newly crowned Best Supporting Actress winner Yuh-Jung Youn called out her Minari producer Brad Pitt for mispronouncing her name. She became the first Korean, and only the second Asian woman to win the title.

(From L) Tiara Thomas, H.E.R. and Dernst Emile II, winners of the award for best original song for "Fight For You" from "Judas and the Black Messiah," pose in the press room at the Oscars on April 25, 2021, at Union Station in Los Angeles. Pic/AFP

Grammy award-winning artist, HER accepted the Academy Award for Best Original Song, a category in which Indian-American Savan Kotecha was also nominated (Husavik).

Fat Max Gsus, co-nominated for Original Song "Husavik" and and Savan Kotecha (R) attend a screening of the Oscars on the early hours of April 26, 2021 in Stockholm, Sweden. Pic/AFP

HER’s Fight for you was featured in the Oscar-nominated film, Judas and Black Messiah. Dernst Emile II and Tiara Thomas also took home a statue for their work on the song. “Musicians, filmmakers, I think we have a responsibility to tell the truth, to write history the way it was. Knowledge is power. Music is power and as long as I’m standing I’m always gonna fight for us,” HER said in her speech.

The traditional In Memoriam montage this year, set to Stevie Wonder’s As, remembered those who passed away in the year gone by. Apart from Diana Rigg, Jerry Stiller, DMX, Sean Connery and Chadwick Boseman, Bollywood actor Irrfan Khan, and costume designer Bhanu Athaiya — India’s first Oscar-winner — were also honoured.

Anthony Hopkins; (right) English actor Riz Ahmed (L), nominated for Actor in a Leading Role for "Sound of Metal" and Fatima Farheen Mirza arrive at the Oscars on April 25, 2021, at Union Station in Los Angeles. Pic/AFP

Beating Riz Ahmed, leading man of Sound of Metal, Anthony Hopkins won the Best Actor title for The Father, making him the oldest actor to win the title at 83. Hopkins beat out firm favourite Chadwick Boseman. Other contenders were Steven Yeun of Minari, the first Asian American to be nominated in the category, and Ahmed, the first Muslim to do so.  Sound of Metal did take home the titles of Best Film Editing and Best Sound. Nicolas Becker, Jaime Baksht, Michelle Couttolenc, Carlos Cortés and Phillip Bladh took home the gongs.

Best Animated Short Film
If Anything Happens I Love You

Best Original Song
Fight for You