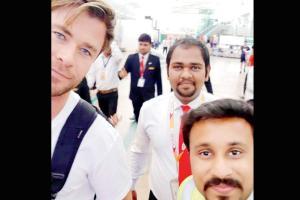 Fans seeking a selfie with Chris Hemsworth at the Ahmedabad airport. Pic/Instagram


With wedding announcements of superstars and the #MeToo movement making news, Hollywood star Chris Hemsworth's trip to India has gone practically unnoticed. The Thor star flew down to the country over the weekend and headed to Ahmedabad for the shoot of the Netflix film, Dhaka. Set in India, the thriller sees him share screen space with Bollywood actors Manoj Bajpayee and Randeep Hooda.

A source reveals, "Chris was spotted at the Ahmedabad airport on Sunday. His shoot kicked off today, but he is yet to be joined by Manoj and Randeep. The former is in Dharamshala for the ongoing Dharamshala International Film Festival." Written by the Russo Brothers, the drama sees Bajpayee play an Indian don whose kidnapped son is rescued by Hemsworth's character.

The makers, we hear, are currently shooting in a secluded location 10 kilometres away from the city. "The Ahmedabad leg will last for 10 days, after which the action will shift to Mumbai. Dharavi and Byculla are two of the locations that have been zeroed in for the shoot. Though it will primarily be work, the Indian crew has decided to play perfect hosts to Chris. Feasting in gullies of Colaba and Khau Gully in Mohammed Ali Road is on the cards."

Hemsworth has also expressed his wish to travel to Rajasthan before the crew heads off to Thailand for the next schedule. "He is keen to explore the forts and cuisine of the land. He had already visited Leh, Delhi, Agra and Goa during his last visit to the country in 2015."

Next Story : Naomi Watts to star in Game Of Thrones prequel