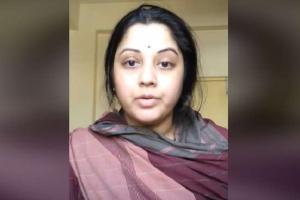 
Actress Vijayalakshmi, after allegedly attempting to commit suicide, was admitted to a private hospital on Sunday in Chennai. She had released a video on social media wherein she alleged harassment by followers of Naam Tamilar Katchi leader Seeman and Panangkattu Padai Katchi party's Hari Nadar.

In the video, she said, "This is my last video. I have been under extreme stress in the last four months because of Seeman and his party men. I tried my best to survive for my family. I have been humiliated by Hari Nadar in the media."

"I would like to tell the fans who are watching the video just because I was born in Karnataka, Seeman has tortured me a lot," she added.

Also Read: Jayashree Ramaiah: I Am Suffering From Depression, Please Give Me Mercy Killing

"As a woman, I have put up with it to my highest capabilities. I won't be able to handle the pressure anymore. I am from the Pillai community, the same community LTTE leader Prabhakaran is part of. Prabhakaran is the only reason Seeman is who he is today, but now he has been harassing me on social media continuously. You sl*t-shamed me to make me feel the pain and it is up to me to decide on what to do after facing such insults from you."

"I request my fans not to let Seeman get away from this case. He should never get anticipatory bail. My death should be a big eye-opener to everyone. I don't want to be a slave to anybody," said the actress in the video.

This is not the first time Vijayalakshmi has made allegations of harassment against her. In February, the actress had accused Seeman of cheating after promising to marry her.

Edited by mid-day online desk, with inputs from ANI

Next Story : KGF 2: Sanjay Dutt's character Adheera will be unveiled on his birthday