Ananya Panday on her upcoming film with Vijay Deverakonda 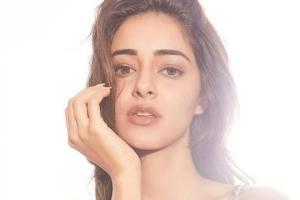 
Ananya Panday is on a roll and there's no slowing down, the actress made a strong debut with SOTY 2 in 2019 following which she was seen in Pati Patni Aur Woh. At the same time, the actress was also shooting for Khaali Peeli and most recently, her first Pan-India film with south superstar Vijay Deverakonda was announced.

Talking about her character in the Puri Jagannadh movie to a leading daily, Ananya shares, "My character is quite like the real me. I think young girls will be able to relate to her cute, funny and charming personality. I am working on my Telugu too, learning a few words every day on the set. I will try to dub for myself in as many languages as possible."

The actress has been making all the right moves all year long and won several accolades for her debut performance with the most recent ones being the Filmfare award for best debutante and also the 'Exciting Fresh Face' award at the Femina Beauty Awards.

Ananya has a busy line up in 2020 with various projects in the pipeline, the youth sensation has always been up for experimenting with various projects and always looks forward to bringing out the various characters to the audience. Apart from the films, Ananya is also the face of many well-known and iconic brands which will further add on to her already busy 2020.

On the work front, Ananya will next be seen in Khaali Peeli along with Ishan Khatter followed by Shakun Batra''s untitled movie with Deepika Padukone and Siddhant Chaturvedi.

Next Story : Kamal Haasan on the Indian 2 incident: Can hardly express my trauma