Jagdish Italiya, a part of this beautiful journey of diverse India is one such artist who is taking forward the legacy and the authenticity of Gujarati music. 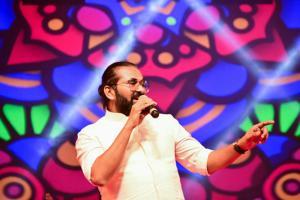 
The best way in which a country expresses itself is through its art and music. And when it comes to expressing itself in art and music, perhaps no country in the world has a greater diversity than India. It is a journey which is unique, diverse, rich and full of talent.

Jagdish Italiya, a part of this beautiful journey of diverse India is one such artist who is taking forward the legacy and the authenticity of Gujarati music. A well-known armature artist in the field of Gujarati music industry, Jagdish has recently got a lot of appreciation with his latest Gujarati song ‘Tari Ankh no Afini’ which has successfully hit 6 million on YouTube & on.

Jagdish recomposed this song in 2015, making his contribution towards the Gujarati Music industry, little did he know that it would become the most viewed and most liked video of his entire career. The song was originally composed in the year 1950. Adding his creativity and innovation to this recomposed song Jagdish says, "I uploaded it, just like a heavy downpour, I am receiving worldwide views of people on the song. I had never imagined that my song would get a viewership of six million people. Listeners across the globe are appreciating me and liking my song”. This recomposition has made him gain a massive fan following where people from all over the world are appreciating his work.

Dedicating his song to his better half, Jagdish Italiya stated that he sang the song to dedicate it to his wife, Mrs Ajita Italiya, which has now reached every nook and corner of the world. It is a great pleasure for me’. Apart from being known as ‘Surati Singer’, he is also famous for his remarkable work in the field of sports and He is an ‘Ultra Cyclist’ too. As a person who is devoted to his occupation and branch of learning, he is well-known ‘EDUCATIONALIST’ among the people of the diamond city of Gujarat.

According to data available on social media and YouTube, the Gujarati song 'Tari Ankh no Afini' has become a massive success. And, like Jagdish Italiya, this famous song has been sung by many singers, so far and has also been uploaded on YouTube and various other social media platforms. This version of the song has got highest views even till date.

Dedication and passion of this singer are COMMENDABLE which makes his composition different and the most popular across the country.

Next Story : Nayanthara and Vighnesh Shivan's Goa get-away amid the pandemic