Trailer of Comicstaan Tamil version released; check it out now

"Celebrated comedians such as Praveen Kumar, Karthik Kumar and Rajmohan will be mentoring and judging contestants over 8 episodes as they find the next best Tamil standup comedian " 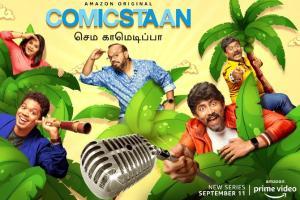 
Amazon Prime Video on Thursday released the trailer for Comicstaan Semma Comedy Pa, a much-awaited Tamil adaptation of audiences’ favorite Amazon Original Series Comicstaan. The launch of the series marks Prime Video’s foray into Original content in Tamil language. In the all-new series, we will see Tamil’s top three comedians Praveen Kumar, Karthik Kumar and Rajmohan Arumugam, experts in their respective genres of comedy, mentor selected contestants who will compete to become the king or queen of comedy in the Tamil stand-up scene. Created by Only Much Louder (OML) Entertainment, the eight-episode binge-worthy series will be the first of its kind on a video streaming service in Tamil language. Adding to the local flavour, the show will be hosted by the dynamic duo of Vidyullekha Raman & Mervyn Rozario. The exciting new unscripted comedy series will launch exclusively on Amazon Prime Video on 11th September in over 200 countries and territories worldwide.

While comedy as a genre is not new to the Tamil audiences, the format of the show is fresh and engaging. It’s the first time ever that a ‘competition’ is being introduced, in a genre like Stand-up comedy for the audiences to engage with. Comicstaan Semma Comedy Pa is expected to bring forth the local flavour - borrowing from the unique nuances of Tamil culture, with exclusive sets performed by each of the participants. The trailer gives a sneak peek into an all-new edition where six of Tamil comedy’s best contestants will compete for the winning title of Comicstaan Semma Comedy Pa.

Aparna Purohit, Head of India Originals, Amazon Prime Video India said that, "Locally relevant content has always been appreciated by our customers; whether it’s a scripted or unscripted series or movies that we’ve released on Amazon Prime Video. We are therefore delighted to launch our first unscripted Original Series in Tamil language, Comicstaan Semma Comedy Pa. Amazon Prime Video is always looking to create new and ingenious content for its viewers, and Comicstaan is one such series, where comedians battle it out to win the Comicstaan title. The first two seasons of Comicstaan received immense love from audiences, in fact, it made standup comedy aspirational for the youth. It not only launched the winners, but also became a spring board of success for many talented contestants! We are now excited to bring to the audience a recreation of the series, produced exclusively in Tamil - borrowing from the local cultural nuances to appeal to our Tamil audiences."

‘We are glad to be a part of a project like Comicstaan Semma Comedy Pa, which aims to provide a global platform to local talent. Leveraging our robust collaboration with Amazon Prime Video with multiple Stand-up Comedy specials, Comicstaan was our collective effort to find and groom fresh, new voices in comedy. With Comicstaan Semma Comedy Pa, it is our endeavor to continue the same momentum and bring to the forefront more creative, relatable and interesting comedy formats to viewers." said Dhruv Sheth, Chief Operating Officer, OML Entertainment Pvt Ltd.

Mentored and judged by some of the most renowned Tamil standup comedians, Comicstaan Tamil features aspiring comedians competing to become the "future of funny" in Tamil stand-up comedy scene. Produced by Only Much Louder (OML), Comicstaan Tamil has been directed by Arjun Karthikeyan and written by D. Jai Adhitya and Mervyn Rozario A are the writers of the series.

Next Story : C U Soon Movie Review: C this soon