Nithiin gets engaged to girlfriend Shalini, shares an adorable picture!

Actor Nithiin has taken to his Instagram account and shared his engagement picture with long-time girlfriend Shalini and its adorable! 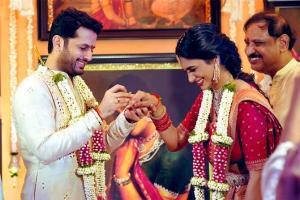 
Telugu actor Nithiin has got engaged to long-time girlfriend Shalini. Taking to his Instagram account, he shared an adorable picture where both of them were at their stylish best.

A majority of the actor's fans could be seen commenting with a heart and fire emoji since they are also as happy as he is on this special occasion. It was also reported that the duo will be getting married on July 26, however, while speaking to The New Indian Express, the actor's sister had stated, "The marriage date is not finalised yet and we will fix it soon."

The actor was last seen in Bheeshma and is now gearing up for his films Rang De and Check. He will then reprise the role of Ayushmann Khurrana in the Telugu remake of the 2018 thriller AndhaDhun. Earlier in February this year, Taran Adarsh had announced this on his Twitter account, in case you missed it, have a look right here:

That's not all; he also has a film with Chaitanya Krishna in his line-up!

Next Story : Find Out what makes the team of French Biriyani formidable