The upcoming episode of Dus Ka Dum will see the star- cast of Loveratri- Ronit Roy, Aayush Sharma, Warina Hussain and Ram Kapoor who will play the game as contestants with host, Salman Khan 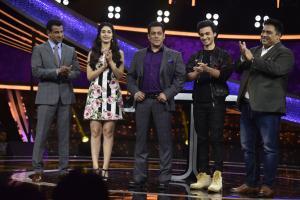 
The upcoming episode of Dus Ka Dum – Dumdaar Weekend on Sony Entertainment Television will see the star- cast of Loveratri- Ronit Roy, Aayush Sharma, Warina Hussain and Ram Kapoor who will play the game as contestants with the Dumdaar host, Salman Khan. The cast made the episode an entertaining one while playing the same and talking about moments and memories of their personal and professional lives.

Loveratri, based on the famous and most loved festival, ‘Navratri’ witnessed Salman Khan playing garba with the star cast which made the shoot even more lively.

On the other hand, multi- talented singer Mika Singh with Maneish Paul who currently seen as the host of the biggest singing reality show, Indian Idol 10 had a blast with Salman Khan by performing Naagin dance on the set. Mika Singh showed a glimpse of his talent by singing a mashup of his top songs which mesmerized the host and the audience.