Britain's Got Talent semi-finalist Akshat Singh: Had 20 days to prepare 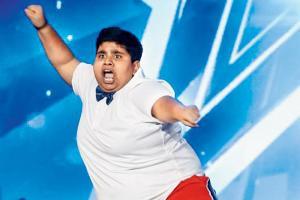 Five years after wowing fans in India with his dancing skills in India's Got Talent (IGT), Akshat Singh, 14, got a global platform with the show's British counterpart, where he also earned the golden buzzer. Singh, who performed on Deva Shree Ganesha and Nicki Minaj's Starships at Britian's Got Talent (BGT) admits the reception to his moves was better than anticipated.

"It was a great experience to represent India in Britain's Got Talent. I trained regularly for it. When I got the golden buzzer, I was almost in tears. I saw my parents in the audience, and they were so happy," says the youngster, whose dance performance in India's Got Talent (2014) earned such praise that he bagged an invite to The Ellen DeGeneres show.

Singh was invited to participate in the Simon Cowell, David Walliams, Alesha Dixon and Amanda Holden-judged project on a short notice. "I had only 20 days to prepare for the competition. I chose Deva Shree Ganesha since I felt my first song should be dedicated to Lord Ganesha, and the second one was to make everyone happy. I think I was able to achieve what I had set out to," says Singh, who qualified for the upcoming semi-finals.

The show, which airs on Colors Infinity next month, also earned him criticism from those who opined that an already-popular child must give way to another aspirant to showcase his/her talent. Unperturbed, he says, "People have opinions and I can't stop them from voicing it. The journey from IGT to BGT has been amazing and there has been a lot of effort behind it. My motto has been to spread happiness, and I am happy that people are loving me back."