Karanvir Bohra might have got criticised by some for being diplomatic on the show Bigg Boss 12, but the "mahaan contestant" of the house says that he is not the type who would just start fighting and abusing someone 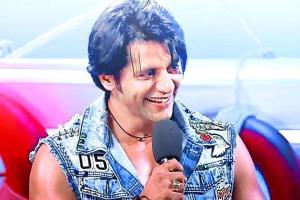 
Actor Karanvir Bohra might have got criticised by some for being diplomatic on the show Bigg Boss 12, but the "mahaan contestant" of the house says that he is not the type who would just start fighting and abusing someone.

"I think I took a stand when I needed to, but I refuse to go down to the level of someone else... to reply back. I am not the type who will outright start fighting and abusing someone and my approach is always calmer," Karanvir told IANS after the conclusion of the show on Sunday.

Despite being called "chachi" and "mahaan" by his fellow contestants, he managed to be in the top five of the controversial show. Actress Dipika Kakar ultimately lifted the trophy.

"The journey was fabulous. 'Bigg Boss' is a true test. It helps you grow, it helps you question and it really tests you. I went through a test of patience, of morals and of choices everyday, but I've come out a changed person. I feel I'm able to see different perspectives and understand people and their motives much better than I could ever have before," he said.

For him, the family week was the most emotional one. "Seeing Teejay (wife) and (their children) Bella and Vienna gave me a lot of strength. Yes, I didn't want to let them go, but when Teejay told me, 'Be someone they can be proud of', I knew I was already doing that but I wanted to all the more continue on that path to make my little girls proud," said the "Kasautii Zindagii Kay" actor.

"I am not a quitter and I think you have seen that in the last three months," he added.

There was also a time when Teejay issued an open letter to the team of Bigg Boss asking them not to "shame" Karanvir on Sunday Weekend ka War episodes. He later apologised to the show's host Salman Khan on her behalf.

Asked about it, he said: "Honestly, I don't know what was in the letter and so, it's difficult for me to comment too much about it at this point. She had her perspective and I had mine staying inside the house. 'Bigg Boss' is a show that asks you to put forth your opinions strongly and Teejay did that outside the house."

He is now looking forward to the release of his film Hume Tumse Pyar Kitna.

"It is releasing in 2019. I would love to take up anchoring as well as web series, both of which I haven't yet been a part of. And of course, I am open to television as well. For me, work has to be non-repetitive and after 'Bigg Boss', I'm all the more ready for new challenges," said Karanvir.

Next Story : Dipika Kakar: Cooking for 17 people, thrice a day is no joke