Navjot Singh Sidhu has been reportedly ousted from The Kapil Sharma Show after a controversial comment in the wake of the Pulwama terror attack. 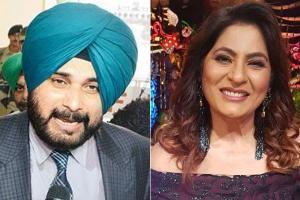 
Archana Puran Singh is back on the seat, which was once occupied by Navjot Singh Sidhu, of The Kapil Sharma Show. She says it's a possibility that she will replace the cricketer-turned-politician on the show.

Sidhu has been reportedly ousted from the show after a controversial comment in the wake of the Pulwama terror attack.

Archana had earlier shot two episodes for "The Kapil Sharma Show" before the February 14 attack on a CRPF convoy that left 40 troopers dead. She went back on the show's set on Wednesday.

"On the set tonight (Wednesday) with Kapil. Great shoot with the king of comedy Kapil Sharma. Took a selfie break to celebrate old associations and new beginnings," Archana tweeted after the shoot.

Asked if she has replaced Sidhu, Archana told IANS: "Nothing is confirmed. It is a possibility."

According to a source, there is another shoot with her slotted for the coming weekend. "I think the Sony Entertainment Television people will be able to answer to that. I am not sure if I will be shooting this weekend or not," she said.

The channel has not yet made an official announcement.

Following the terror attack, Sidhu, who has been part of Kapil's show, had said during a media interaction: "Nations cannot be held responsible for the dastardly acts of terrorists. The terrorists do not have deen, mazhab (sect and religion). There are good, the bad and the ugly. Every institution has them. Every nation has them. The ugly need to be punished..."

His comments led to a huge uproar, with hashtags like #BoycottSidhu #BoycottKapilSharmaShow and #BoycottSonyTV trending on Twitter.

Next Story : Lisa Ray: I don't like defining people or be defined